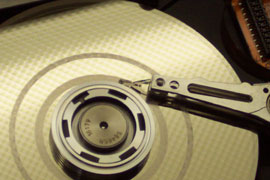 It’s bad enough that my MacBook is running hotter than Hades since I upgraded to Leopard, but the last thing I need is for my HDD to crap out. Luckily my MB does not have a 2.5-inch drive from Seagate. Retrodata, a data recovery outfit in the UK, noticed something was amiss with the Seagate drive equipped MBs as they’ve seen 50 or so since last summer. Upon further inspection, Retrodata pinpointed the cause to be:

the head in the drive becomes detached from the read/write arms, causing the latter to “gouge deep scratches” in the disk. Unless the user shuts off the computer immediately, then the damage can be so severe that data recovery is impossible.

Apple spokesman Cameron Craig had this to say,

We’ve received a few reports that some MacBook consumer notebooks may have hard drive issues, and we’re looking into it.

If you have a MB then I’d check the Revision under S-ATA in system profiler to make sure it doesn’t read 7.01. If it does then back that up and get a new drive.