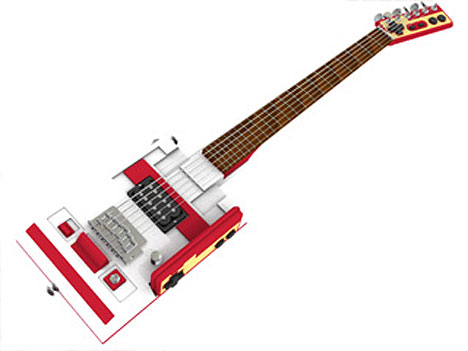 Cords getting in the way of your thrashing? Didn’t bother Van Halen, but what with the newfangledness these days of microphones, wireless pickups, and blue teeth, you don’t need to let the analog world impede on your digital fantasy. Wireless Guitar Hero III controllers will be available starting in early 2008 in “exclusive” Les Paul models – although I don’t see how they are exclusive if no current console is excluded from getting one. The PS2 also gets an “exclusive” Kramer body. Regardless, it’ll be sweet not having to worry about tearing the controller from its port when you jump on the back of a couch in a state of hair metal ecstasy.
(above image probably not accurate, but I really, really wish it were)