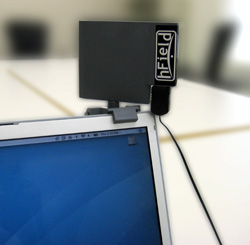 It’s been a few years since Wi-Fi became essentially ubiquitous but there are still a few areas where the average consumer isn’t served. Sure, there are lots of great routers and Wi-Fi cards of all stripes, including beasts that run at 802.11n speeds and have ranges of five billion miles, give or take a few billion. But there are are a few places — high-quality USB adapters and Wi-Fi-to-Ethernet bridges, for example — where where the Wi-Fi market is under served. The Wi-Fire from hField stops up at least one of those holes.

The Wi-Fire his a long range USB Wi-Fi adapter with drivers for OS X and Windows (Peter talked about it in September but I thought it might be good to give it a second look — they also reduced the price). It is about as big as a USB card reader and packs flat for portability. First, let’s look at some of the numbers. Using a standard G wireless card, I saw about 9mbps in speed tests. Using the Wi-Fire, I averaged about 9.5 to 10mbps — not an amazing improvement. I was, however, able to leave the house and go about 400 feet away from my access point and still maintain a strong connection. The numbers, as a whole, stood up to hField’s claims of 300-1000 foot range using the adapter.

In terms of general usage, the Wi-Fire is fairly simple to install and use. You plug it in, install some drivers, and you’re golden. The directional antenna can turn 360 degrees and includes an integral monitor clamp that lets you hang it off a laptop like a webcam.

Clearly, there is a dearth of these devices mostly because they are so rarely needed. Built-in Wi-Fi adapters are everywhere, so why add something that hangs off of your laptop like a barnacle. As Peter wrote, the Wi-Fire is great for stealing Wi-Fi from your neighbors. They’ve reduced the price of the Wi-Fire about $30 — it’s now $79 online — which could make for a good aid when deciding when/if to get broadband to the hotel or even at home.