Michael Arrington wrote on Saturday about a new Digg competitor called Mixx, and how it was attracting “Digg Refugees.” Digg clones or similar social voting sites are far from new, but given this new competition does Digg still come out on top? Since reading Michael’s post I’ve spent time using several Digg-style sites to see if I could find the answer. 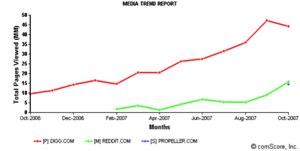 Numbers should never be the final arbiter of what is good. Windows is still the most widely used operating system world wide but many would argue it is far from the best; however numbers help, and as comScore demonstrates Digg is still the most popular social networking site when compared to three competitors: Reddit, Propeller and Mixx.

It’s hard to make out Propeller on this chart, but with a microscope they are a small blue dot just below the October (green) line for Reddit. Despite some of my previously harsh observations on the service they are doing remarkably well under their new banner; if Reddit sold for a rumored $12m in October 2006, Propeller must be worth around $30-50 million now based on the traffic alone. Mixx is soo small it doesn’t register on comScore’s metrics.

More people use Digg, but does it make them the best service?

Content is something that benefits from a bigger user base, and again Digg has the advantage here. When Propeller launched (originally the old new Netscape) then head Jason Calacanis promised a better version of Digg because the results and top stories would have the guidance of paid guides. It works as much as it provides a broader picture of news stories, but it fails in the same way that any non-democratic decision making process does: it doesn’t always have the support of many. It’s not unusual to see stories on the top of sub-sections (say Tech) on Propeller that had a handful votes despite the site having a reasonable user base that usually sustains stories on mid-range 2 figure sums. If it has two votes, should it be on top? It wouldn’t be on Digg.

Reddit has the problem that despite it providing perhaps the biggest difference in terms of the content and links provided, it appears to be beholden to the political campaigns of Ron Paul and Dennis Kucinich. I find some interest in both campaigns given their interesting and often inspiring use of the internet as a campaigning tool, but I’d figure that I’m probably in the minority on that one.

Mixx is getting there. Since Michael’s post the number of people voting on the site has definitely increased and even former Netscape head Jason Calacanis is now participating (a Mahalo link was the top story as I wrote this post).

Appearance is subjective and no two people usually agree on any given site, but there’s just something about Digg. Whether it’s the nice big headlines, the easily accessible voting box and bury buttons, the colors and layout that just work; it could be that it’s a case of familiarity but I just don’t see the same on the other three sites.

Reddit is functional and simplistic, which works for them, but it isn’t pretty to look at, and it’s probably not the best first impression for new users either.

Propeller tries to sit somewhere between Digg and a functional news sites, and it doesn’t do a bad job, but I’ve never felt as comfortable with it. Headlines are smaller and visually it doesn’t feel quite as accessible as Digg; but having said that this is a subjective view only, and others may well disagree. Mixx is remarkably similar to Propeller, soo much so (once you get to the sub pages) that I’d suggest that Mixx isn’t a Digg clone, it’s a Propeller clone.

One often heard criticism of Digg is that the headlines can only be understood by “insiders,” those that know tech. It’s occasionally a valid criticism but over all Digg’s biggest strength is its depth and variety of content. The politics pages don’t require an in-depth understanding of the latest screen manager for Linux, nor do many of the sub-categories. Redditt is Digg’s closest competitor appeal wise, but it doesn’t have the depth and variety of news headlines. Propeller and Mixx will have the greatest appeal to a new, non-geek/ non-first adopter audience, but that very same audience may not be quiet as embracing of social voting itself. It’s the right demographic to appeal to because it’s an untargeted audience, but Digg continues to gain new followers as well as its audience broadens (despite the small decline in the comScore graph); call it a race for middle America.

On what I’ve seen I still believe Digg to be far and away the best social voting destination based on its current competition. However all competition is good and I do encourage others to try and use other sites; it’s the best way of keeping Digg honest in the future.