Classifieds search engine Oodle has just pushed through a major upgrade to its Website, which searches 30 million active classifieds listings across the Web. It is also testing an ad network across other sites that drops a local classified from Oodle’s paid listings at the bottom of a related classifieds search on a partner site as backfill, or as a contextual ad on the side of a page.

Oodle’s new interface offers better guided search across its nine categories (cars, real estate, rentals, jobs, pets, tickets, personals, services, and items for sale). This includes the ability to refine your search in a hunt-and-peck way by selecting multiple sub-categories at once (for instance, you can look for apartments in both Williamsburg and Tribeca, or for Toyotas and BMWs, all in one search). 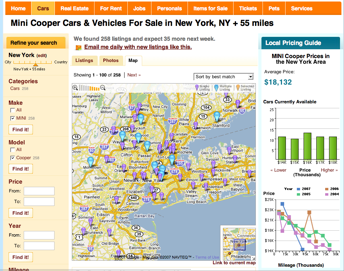 Depending what category you are looking in there are also lots of helpful geographical sliders and other suggested ways to parse your search (by breed, for pets; by make, price, year or mileage for cars; by neighborhood, square feet, or amenities for real estate; by gender, sexual preference, marital status, smoking habits, hair color, and zodiac sign for personals). Oodle surfaces comparative pricing information in a handy graph for categories where it has enough data, such as cars. (The average price for a used Mini Cooper in New York City, for example, is $18,132 and the 2007 models show the steepest price declines). It also gives an inventory forecast—”We found 258 listings and expect 35 more next week”—based on historical patterns. Most search results can also be seen on a Google map. .

CEO Craig Donato wants to make searching for classifieds across the Web as easy as searching for any retail product or service. But classifieds are a strange beast. He describes some of the challenges people encounter when looking for something listed as a classified:

When it is gone, it is gone—because it is one of a kind. Listings are poorly described and spread across many different sites. Searching is time-consuming. You are not just searching, you are hunting. And good deals tend to go quickly.

His approach at Oodle is to make such searches easier by adding guided categories to help people refine their searches, e-mail alerts and inventory forecasts to help people keep track of listings over time, price comparison tools to help them make a buying decision, and sophisticated spam detection to help them avoid being cheated. The search engine adds more than 500,000 listings a day from 80,000 sources, such as Autobytel, Cars.com, Career Builder, Monster.com, Kijiji, locally-tagged eBay listings, real-estate broker sites, and local newspapers.

Conspicuously absent is Craigslist, which blocked Oodle from searching its listings a couple years ago. “We have a lot more listings than Craigslist,” claims Donato. “They have massive duplication. On Craigslist, you pay with your own time to list again and again.” On Oodle, you pay if you want your listing to stand out from the crowd. “What people are paying for is visibility,” says Donato.

Oodle is creating that visibility, he says, by attracting two million visitors a month. Between 25 to 30 percent of its traffic is coming from partner sites, such as TV-station sites that want to get into the local classifieds business, as well as some regional newspapers that add local listings from Oodle’s paid inventory to their own classifieds listings (and keep the lion’s share of any resulting click-though revenues). Donato say he is in the middle of rolling out about 200 of such partner deals, and expects Oodle to turn its first operating profit next year.

Disclosure: Michael Arrington is a founder and director of Oodle competitor Edgeio. 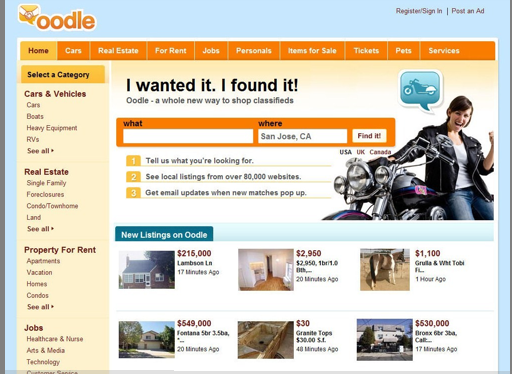