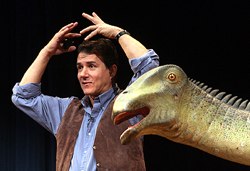 A thread on Digg relating to a new dinosaur discovery in Africa is raising eyebrows and not for the right reason.

The thread on the “Nigersaurus” (here) contains comments such as “I wonder what made this thing extinct? AIDS?.” Digg’s comment system has buried some of the comments from immediate view, but reading them simply requires one click. Ethan Kaplan asks whether Digg has now become racist jokes and bad science and goes on to make that point “they banned the key for decrypting HDDVD but let this shit on here? Bad form.”

Certainly most people will find the more extreme comments offensive, but with the picture (above right) I can’t help but think that its worth at least some derision, although without the racism chucked in. Have the Digg commenter’s gone too far and should Digg censor the thread? or is this political correctness gone mad and the thread should be left as is? Let us know what you think.