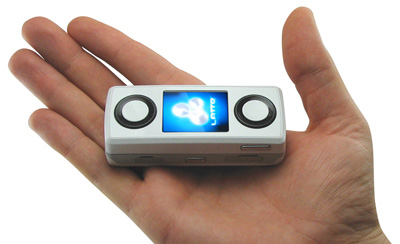 To me, “ghetto blaster” can mean either of two things: a so-so album by Armand van Helden and a stupidly large boombox popular in urban areas some 20 years ago. Looking at this cellphone—generically referred to as the Mini Boombox GSM Cell Phone—the phrase “ghetto blaster” does not come to mind. Yes, it plays MP3s, but so so watches nowadays. Yes, it has a built-in speaker that, apparently, gets fairly loud, but so does practically every other phone on the market. (My deplorable LG Chocolate does, for example.) So I don’t understand why we’d go out of our way to call this a “ghetto blaster.” It’s simply an unlocked GSM cellphone, meaning you can take your T-Mobile or AT&T SIM card and use it right away.