Perth based startup Norg Media wants to bring community back to news with a service that’s hard to pigeon hole.

At a basic level Norg (short for news organization) is social media that encourages “citizen journalism.” Each Norg Media site focuses on a city and gives users the ability to submit news stories. Stories are then voted on by other readers, but not Digg style. The voting process does push stories up higher on the page, but given its focus on timely news the votes are weighed, and stories automatically move up and down dependent on this weighing process. Blog style users are able to comment on each story.

Submissions can come in a variety of formats. Users can add a short blurb and a link to another news site, or can write their own story. Video and photo submission is also encouraged.

I caught up with the Norg team today and pushed them for a model or easy way of describing what they do; I still haven’t got one. CEO Bronwen Clune told me that this isn’t a hyper-local play, despite the similarities with failed startups such as Backfence. Clune emphasized that this was a low cost, community powered model that will only expand into markets they believe there is demand. She also says that it’s not a competitor to main stream media sites, despite the news emphasis; she sees it more as a niche community news service that is selective with what it publishes, and does not employ writers to generate content, an obvious news site play.

Norg media has this week expanded from its Perth base and now offers Norg sites for Brisbane, Sydney and Melbourne, with plans to expand into the United States and the United Kingdom in the next 12 months.They are also looking at options for partnerships in non-English speaking countries, having already been approached for partnerships in countries including China. The two person operation is privately funded but is currently talking to investors for funding to bring on new staff so they can better facilitate their international expansion. 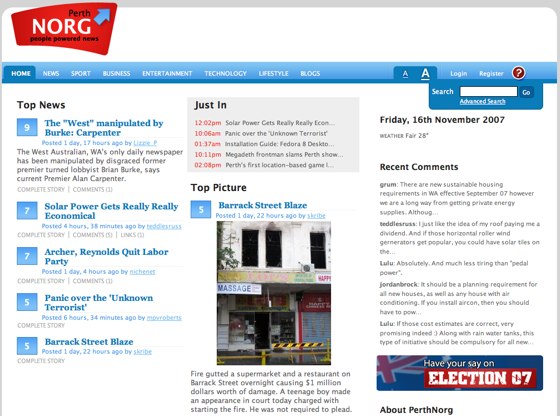