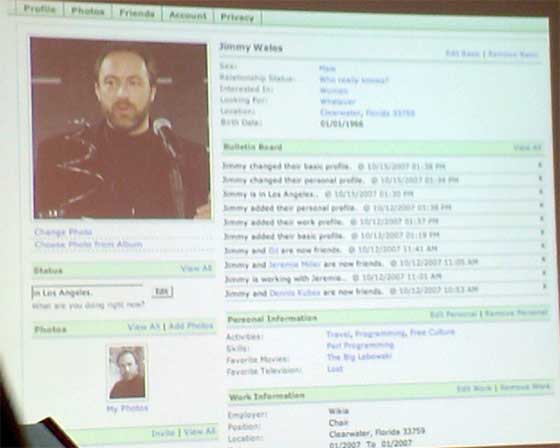 It was eleven months ago that Wikipedia founder Jimmy Wales first mentioned his vision for a people-powered search engine that would eventually launch under his for profit startup, Wikia.

Not much has happened since then, other than a lot of chatter on an email discussion list, and the small acquisition of Grub, a distributed web crawling company, from Looksmart. The official site for Wikia Search is here.

But the promise has been for Wikia Search to launch this year, and it appears to be on track. Yesterday Matthew Buckland reported that Wales showed “some of the first screen shots” of the new project (the first, as far as I know).

The main screen shot is a profile page for a user (see above) that looks surprisingly like a Facebook profile. It was taken by Nic Haralambous.

The Man v. Machine debate as it applies to search is about to begin. By this time next year we should have lots of data on the performance of Wikia Search, as well as the new startup Mahalo which is also in this space. Until then, we can spend our time speculating and, I guess, continuing to live with Google for our search needs.