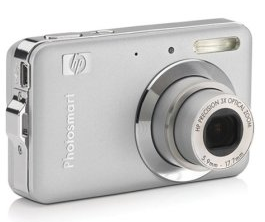 Hewlett-Packard is retreating from the digital camera business. It will stop manufacturing its own cameras, and take a $30 million charge to refocus investments on its Print 2.0 strategy, which involves making Web content easier to print and encouraging more printouts. (Remember, HP makes a huge chunk of its money selling ink cartridges). The writing was on the wall on this one. HP’s share of the digital camera market in the U.S. shrank precipitously this year—from 7 percent at the end of 2006 to 4 percent at the end of June, according to the latest figures from IDC. Back in 2001, HP’s market share peaked at 15 percent, ranking it third among all digital camera brands. It now ranks No. 8. This is a typical move for CEO Mark Hurd—cut your losses and move on. (The HP brand could live on, though, licensed to another manufacturer).