Within hours of Facebook’s announcement of its social advertising plans, the backlash began. What about privacy? What about relevance? (I know everyone is sick of hearing about Facebook, but there are some important business issues at stake here, so bear with me). As far as privacy goes, there is none on Facebook, in that any information you share is fair game for targeting by advertisers. So get used to it. You don’t want to be targeted, don’t share information on Facebook. Perhaps the more important question, though, is around the relevance of the ads themselves.

Already, there’s been some insightful critiques on this front. Nick Carr started things off with his tart summary: “The medium is the message from our sponsor.” He goes on to point out that becoming a fan of a animated Sprite can is not exactly a revolution in advertising: 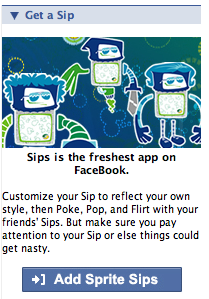 It’s a nifty system: First you get your users to entrust their personal data to you, and then you not only sell that data to advertisers but you get the users to be the vector for the ads. And what do the users get in return? An animated Sprite Sips character to interact with.

Henry Blodget asks, not unreasonably: Will advertisers pay people to recommend their products to friends? (That would be a bad idea, but you never know what Madison Avenue will try to do next).

And Umair Haque warns of adverse selection with Facebook ads that are presented as updates to people’s feeds (aka Beacons). Excerpt:

Beacon is essentially a biased market mechanism. That is, advertisers have control – but connected consumers (despite Facebook’s hype) don’t.

The synthetic relevance Facebook is pushing is a drug for the strung-out advertisers of the world: they desperately need a hit of something to make them believe they matter again.

And, crucially, consumers will be trapped into not just receiving crappy ads – but sending them as well.

These are all valid points. The best referrals come from people who know you have a particular need or are looking for something. They usually come out of a conversation. “Have you seen any good movies lately?” “Oh yeah, just last week we rented . . .” I only want referrals when I need them. If all my friends and casual acquaintances start bombarding me with referrals that are not matched to what I need, that could very quickly just become another source of noise I need to filter out.

And yet, it is just too soon to tell where all this will go. Granted, many of the advertising partners that have jumped on board this bandwagon are faceless consumer products companies. I am not sure I want to be a fan of Sprite or Chase or Verizon (and I am a customer of all of these brands). But some of the partnerships do make sense. I don’t mind identifying myself as a fan of the New York Times. 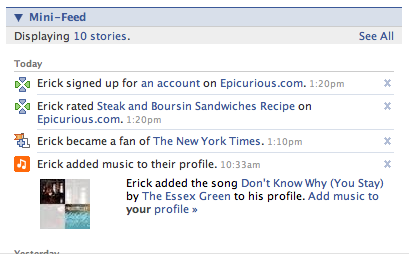 The social ads that will work will tend to be niche or high-end brands that people really like to show off because it says something about who they are. They will also work for other media sites where people already interact in a social way.

For instance, Epicurious now knows if you are a Facebook member and broadcasts any recipe you rate or save on the site to all your friends on Facebook (via their feeds). You can opt out if you don’t want to share this information, but it seems to me to be very similar to what people are already seeing in their feeds. “I like this recipe, check it out.” The New York Times will be doing something similar for travel ratings, movie ratings and reviews, and articles you save or e-mail (except, in that case, you will have to opt in to share the information and it won’t say who you are emailing it to). That too seems to me to be in keeping with the spirit of the Mini feed. “Here’s an article you should read.”

But those are not product endorsements. They are more akin to other Facebook applications, except that they are surfacing activity from a different site. Which is why I think that for this to work advertisers need to think more like developers. Help people do something useful, informative, or fun, and they will gladly broadcast that experience to the world. If people see these as ads, they will revolt. If they see them as indistinguishable from the stream of Facebook chatter already in their feeds (which is often inane, but addictive nonetheless), the messages will have a better chance of getting through. 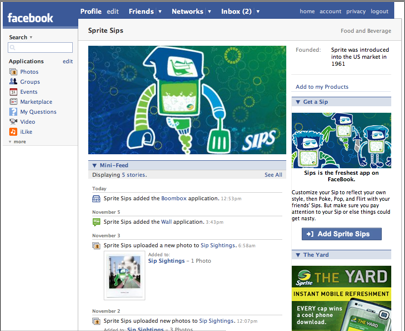