Mobile community builder Mozes has been releasing some new functionality over the past couple of weeks that enables users to access their Mozes activity across the web and participate in voice-based campaigns.

Mozes is a company we covered over a year ago (and BusinessWeek wrote up recently) that focuses on connecting musicians with their fans using text-based mobile campaigns. Much of this consists of running contests at concerts. If you saw Maroon 5 perform live recently, you may have participated in a contest to win a prize pack by texting a Mozes number with your cell phone and joining the band’s “mobile group” (basically a cell phone-based fan club). Similarly, the band Plain White T’s have run contests at their concerts for giving out backstage passes. Once users are drawn into bands’ mobile groups, they will continue to receive messages and special content from their favorite artists via text messaging, even after the show has ended. So far, Mozes works with over 1,000 artists including Fall Out Boy, Avril Lavigne, Nelly, and R. Kelly to create these mobile fan groups. 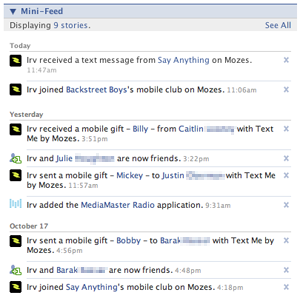 For awhile now, users have been able to log into their account on Mozes’s website to access all of the activity going on in their mobile groups (and read messages that the artists themselves have texted to the groups, download exclusive content like MP3s, etc.). Mozes is extending its reach by syndicating mobile group activity across the web in two main ways: by pushing the data out to social networks with a Facebook application and a MySpace widget, and by providing RSS feeds. The Facebook application (Text Me) and MySpace widget work similarly: both display notifications generated by the Mozes groups to which you belong (see screenshot to the left). The company also says it will be looking forward to participating in Google’s OpenSocial initiative.

Mozes has also added the ability for fans and musicians to exchange voice messages with one another. Artists can reach out to their fan base by sending them short audio clips, and fans can return the favor by sending voice recordings back (although I wonder how many artists will have the interest or time to sort through voicemail messages left for them by fans). Voice messages can also be syndicated; check out the widget on Nelly’s MySpace page that plays messages from a US map.

While Mozes focuses on musicians, their network can be extended to other uses. For example, we partnered with Mozes in September to enable TechCrunch40 conference attendees to vote on their favorite companies via SMS.