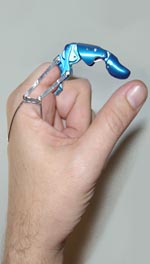 Gregory Ng isn’t like us. He doesn’t understand what’s going down in the world today. He’s tuned out, not connected. When Time announced that the iPhone was the invention of the year, people were all like “Awwww yeah!” and we were all like “Yeah, bay-bee” — mostly me because the rest of the guys were all like “Awwww shiiiii…” and then I stopped them. No cursing in front of the readers.

Anyhoo, Mr. Ng believes that some kind of Diesel Exhaust Purification Systems or X-Fingers (“The X-Finger is a functional artificial finger designed for finger amputees that enables patients to perform tasks such as typing, working and playing a musical instrument,” but you know what they’re really going to use it for) are the real inventions of the year, not that little lump of greatness called Senor iPhone. Listen, hoss: Time wanted to focus on inventions that changed the world, not inventions whose companies sell on the penny stock market and then disappear into the patent morass. The iPhone is invention of the year because it is widely beloved, pushes the cellphone envelope in ways no one has been able to replicate and it’s really cool and great and so great.

So poo on you, Mr. Ng. Go and sit on your X-Finger and leave the picking about the best things in the world to the best magazine in the world, Time Magazine.

The iPhone Winning “Invention of the Year” is an Embarrassment [iPhoneMatters]