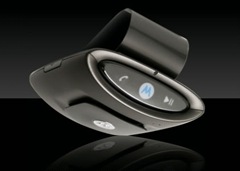 This is an interesting device and, as fate may have it, a device I’ve been waiting on for quite some time now.

It’s basically a Bluetooth speakerphone that clips to your visor and outputs sound to your car’s stereo. You can use it for calls but, even better, you can use it for audio. So if your phone or MP3 player does Bluetooth, you can stream your tunes directly to your car stereo without any wires.

Sound quality is going to be THE make-or-break feature for this device, since FM transmitting is still a little shaky. It uses a feature called “StationFinder” that supposedly finds the cleanest open FM station in your car, so hopefully it’ll put out some clean sound.

The Motorokr T505 will be available in the first quarter of 2008. Pricing has not been set, but I’d hope that it would come in at or less than $100.