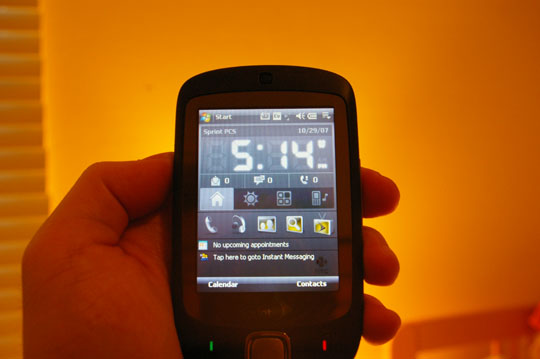 The Touch by HTC, which will be offered by Sprint on November 4, is hands down one of the best devices I’ve used in the past two years. That says a lot considering the number of devices that roll through the CrunchGear offices. But to each his own, I say. The Touch has been an integral part of my stay in the Bay Area and has saved me on more than one occasion.

When I first saw the GSM version of the Touch months ago, I wasn’t that impressed. I usually snub any device that runs Windows Mobile and I thought TouchFLO was just a gimmick, but I can admit when I’m wrong. I like the Touch and I don’t want to send it back! We’ll gloss over the specs and then move onto HTC’s unique UI that is better than the other phone with a touchscreen interface, which shall remain nameless in case there are fanboys or haters that feel like spouting off. These are two entirely different devices aimed at different groups. 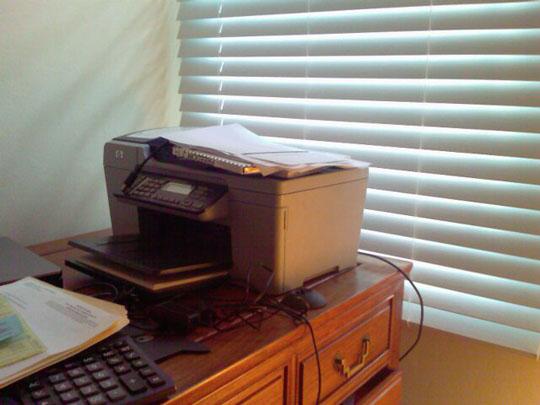 The Touch features a microSD slot with support up to 4GB and includes a 512MB card. The 2-megapixel camera has 5x zoom with video capabilities. Stereo Bluetooth, which should be a norm with all phones! The Touch also has voice-activated dialing, which comes in handy while driving and something the other thing doesn’t have. It’s also one of the tiniest, 4.0x 2.4x 0.6-inch and weighs 4oz, and most powerful devices out on the market. Not to mention a 3-inch screen that’s nice and bright. 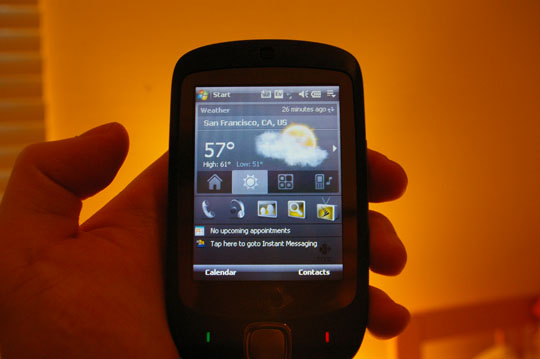 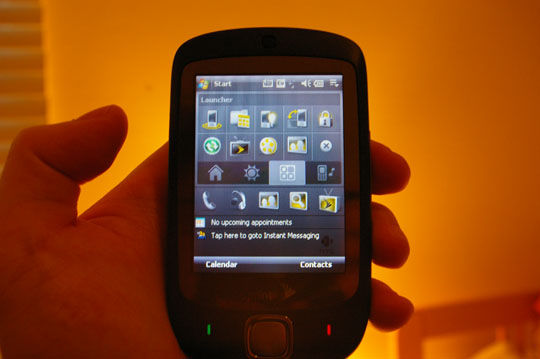 So how does Windows Mobile 6 look on the Touch? I never really knew it existed since TouchFLO masks the ugly beast. Everything about the UI is based on natural movements and I found it easier to use then the other phone with touch capabilities. The Touch served as my modem while scouring the aisles at CTIA and was simple to tether to the ole MacBook via Bluetooth (life saver #1). Sprint’s 3G network is wicked fast and got the job done. I think I tapped ‘Start’ once during my two weeks with the phone. I tend to forget about WinMo and I like that. That’s how it should be. The Touch didn’t have any noticeable lag time switching from app to app or when starting up the camera. I was pleasantly surprised. I found myself leaving the Ocean and Sidekick at home while bouncing around the Bay. 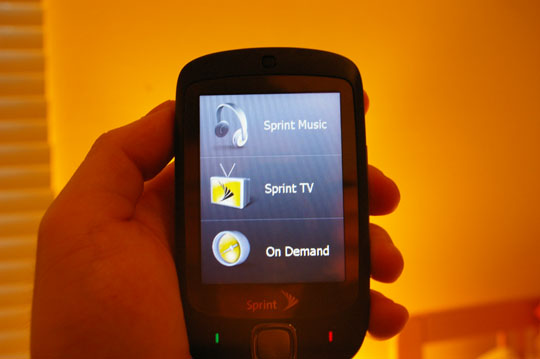 The main menu is effortless to read and only takes a few minutes to figure out what’s what. Need the current temperature and future forecast? Tap the sun and there you go. Everything is adjusted so that you only need to tap an icon once and it pulls up whatever you need without having to dive down through sub-menus. The neat part about TouchFLO is activated when you swipe from the bottom of the screen to the top. It’s here that you’ll find three different menus to flow through with a simple swipe. Rather than a “top 5” you can have nine contacts with their own picture or picture of your choice. You can also access Sprint’s Music, TV and On Demand stores with a tap of the finger. The last menu gives you six options that include an IM client, software store, IE (which kicks much ass since it’s a full Web browsing experience and this was life saver #2, I couldn’t find the suite where my meeting was and all my other devices couldn’t access my CG e-mail), SMS, Comm Manager and mailbox. 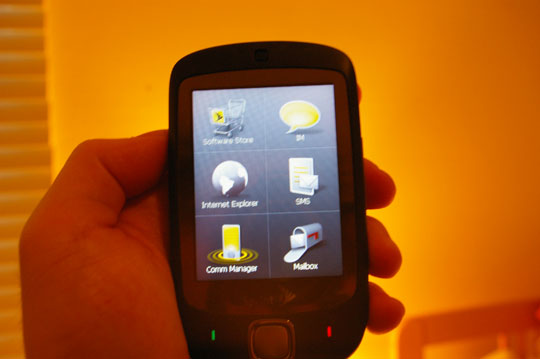 When viewing images you can draw a quick circle around a certain section of a photo and have it enlarged for you to inspect. Need to rotate the photo? Slide your finger across and it’s done. Well, let’s say you’ve got a long list of contacts or messages that you want to gloss over pretty quickly. You’re sort of unsure what or who you’re looking for, but you’ll recognize it when you see it type of thing. Jump into your contact list or message list and swipe down or up, which sends everything into motion and once you see what you want just tap the screen and it automatically stops. No need to continuously scroll or tap buttons to scroll through lists.

Sounds simple, right? That’s because it is!

What do I hate about the Touch? I like keyboards and I don’t use a stylus. But there is a Touch slider coming so that may be sufficient enough. Wi-Fi would be nice, but isn’t necessarily a deal-breaker. That’s pretty much it. If you’re a Sprint customer then I highly suggest you pick this up. If you’re not a Sprint customer then I suggest you switch. The Touch by HTC on Sprint is only $249.99 after a $100 mail-in rebate. Get it, you’ll love it. 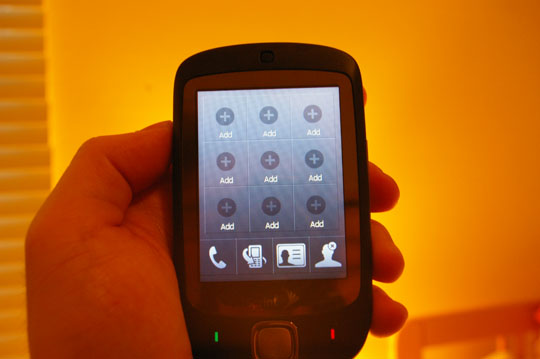 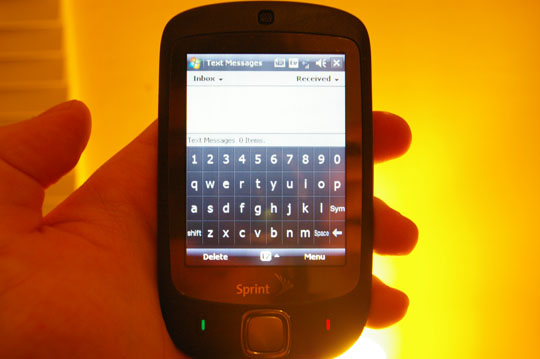 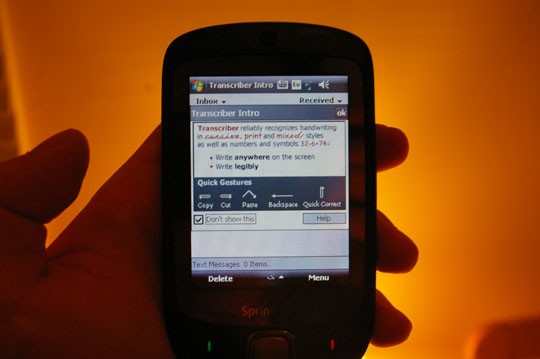 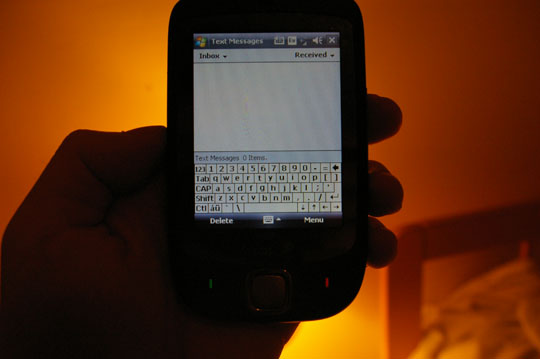 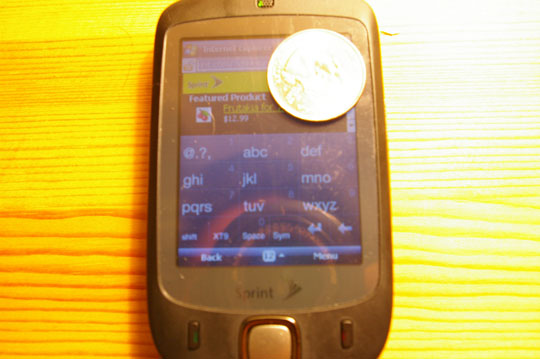 Update: Well, I seemed to have failed to mention one of the most important things about the Touch. I’m not fond of the other phone’s touch keypad, but the HTC touch keypad is easier to use. With the other phone I found that you had to tap to the left of the desired key. You don’t have to worry about that with the Touch. The touch keys are significantly smaller, but the software running the touch input seems to work fairly well. It knows the difference between the stylus, finger nails and finger pads (is that right?). It’s responsive enough to touch and taps that I very rarely found myself having to re-tap anything. The XT9 predictive text sucks, but that’s only because I hate all predictive text since I’ve been using a full QWERTY keyboard for the last couple years. Walking and inputting text isn’t much fun, but it can be done. When I found myself in a hurry I whipped out the stylus, but the rest of the time I remained in its slot. Hope this helps.