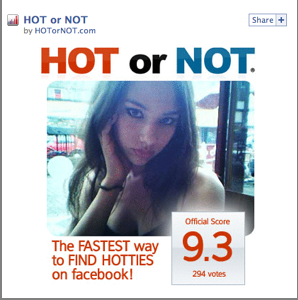 Ever since HotorNot abandoned it’s experiment with going totally free last month, the traffic to its destination site, HotorNot.com, has predictably leveled off. Meanwhile, its application on Facebook is doing pretty well, already accounting for about a third of its daily logins, and 40 percent of it total unique visitors (although the two remain separate services at this point). On Facebook, HotorNot is one of the top 50 apps (No. 45 last time I checked—not a blockbuster app, but respectable), as measured by its 130,461 active daily users (out of nearly 2 million total registered users) on the social network. That compares to millions of casual visitors a month to HotorNot.com itself, where voting is still free and 500,000 people a month login to use its subscription dating service. HotorNot founder James Hong says “the potential of the facebook app for us is on the same order of magnitude as our .com service.”

If ever there was a Website designed as a social application, it is HotorNot. It’s the original voting app, applied to ranking people’s looks. HotorNot took off because it’s simple, voyeuristic, somewhat addictive, and a great time-waster. And for a meaningful percentage of users, it can actually lead to a date (although that feature, which people pay for on HotorNot.com, is not as fully developed yet on Facebook). So with this in mind, I recently asked Hong why it needs to remain a destination site at all. His response:

I have really stopped thinking of HotoNot as a destination site and worry about how many people are using our service no matter where they are. The concept of a destination is so 1999. I think you are going to see a big shift. People will go where they will go. The world is evolving. Sites like HotorNot are starting to see themselves as services and less as destinations.

The same could be said for practically any destination site. The concept of drawing traffic to a central Web destination is blowing up for all but the largest sites. A site today needs to be able to live everywhere on the Web (and not just on Facebook).

But Facebook remains a special case since it is becoming an uber-destination for many different services on the Web. That is why Hong compares Facebook to a mall. If everyone is going to the Facebook mall, then Hong is better off sticking HotorNot in the mall than trying to get people to come to his standalone site. Even if Facebook starts charging rent, Hong is fine with that as long as the rent is reasonable (like any mall landlord, Facebook should know that its stores have to make money too). The same goes for MySpace, which Hong is eager to develop a HotorNot app for once MySpace opens up its platform.

The mall analogy breaks down a bit, though, because the social network landlord could one day create its own HotorNot app and promote that to its members—which would be like a mall owner opening his own clothing store to compete with the Gap, greeting people at the door with flyers as they enter the mall, and charging his store below-market rent. But that’s a risk any Facebook (and, soon, MySpace) developer has to take. Then, of course, there’s the fact that malls tend to lose their foot traffic as soon as a newer one opens up down the road.

Still, why not just ditch the destination site altogether if HotorNot is more powerful as a social-networking application? (On Facebook, for instance, it’s easier to vote on how attractive all your friends are and their friends, rather than be presented with total strangers). It is not hard to imagine one day soon when more people will access HotorNot through Facebook, MySpace, and other social networks than through the site itself. HotorNot should just become a widget company or sell itself to Slide, right? After all, Slide (which Hong happens to be an investor in) is in a better position to serve ads across widgets and Facebook apps since it owns a network of the most popular ones.

It all sounds good, except for a few things. First, HotorNot makes its money from subscriptions, not ads. When Hong tried to make his dating service ad-supported, the spam level became unacceptable. Second, it not yet clear what kind of landlords Facebook or MySpace will become (see above). Third, the question remains whether or not a social-networking app is more useful inside the context of that social network, or if there is power in bridging together different people from different sites. A single app spread across many sites could benefit from greater network effects than many apps that are each stuck in a separate social-networking silo. Right now, the HotorNot Facebook app is built on a separate system than the main site because that was the fastest way to get the app up and running. But that won’t always be the case. Once you cycle through everyone in your social circle, then what?

These are issues that any startup developing a Facebook app must grapple with. In the end, the most successful social-networking apps will find clever ways to both bring in data from similar apps living elsewhere, while at the same time still hooking into the various social networks so that they seem like they were customized just for you and your friends.