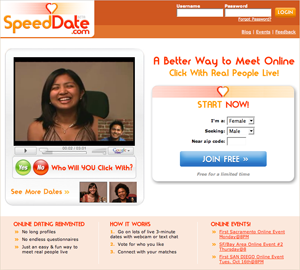 You may not have come to TechCrunch looking for love, but we might be able to help you out anyway. SpeedDate, which launched as public beta in the last few days, brings the concept of speed dating to the web.

Rather than asking its users to fill out surveys describing their interests and personalities, SpeedDate gets right to it by throwing you into 3-minute long “dates” with potential matches. All you need to do ahead of time is enter the basics: your zip code, your gender, the gender of the person you are looking for, the age range of that person, and how far you are willing to travel for them.

The dates are conducted by webcam so you can hear and see your date. Curiously, you can also communicate through a chat box. When you’ve made a judgment about whether you like the person, just click “Yes” or “No” to indicate whether you want to follow up with the person after your first three minutes are up.

Since the service has yet to gain a substantial user base, SpeedDate has been organizing “events” in which users are encouraged to come online at the same time. The first one took place this past Thursday while the service was still in private beta. About 230 San Francisco Bay Area singles went on 1,100 dates. The next one is tonight at 8:00pm and doesn’t appear to be meant for a particular region. The company says it has received positive feedback about these events from both men and women.

SpeedDate demoed at the TechCrunch40 conference and will compete with soon-to-be-released WooMe, which presented on stage at TC40.