The VAIO SZ6 series is a relatively new addition to Sony’s notebook line. I picked up the VGN-SZ650N/C model, which features a 13.3" screen, carbon fiber casing, long battery life, dual graphics cards, and a hybrid hard drive with 256mb of built-in flash memory. Looks good so far, but how does it perform?

What’s in the Box? 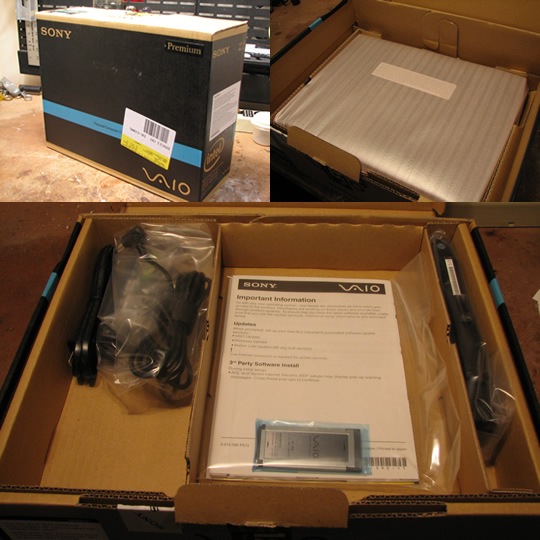 Pretty average unboxing, not that I was expecting to trip over my couch. That little silver thing in the middle tray there is a memory card reader that slides into the ExpressCard slot. 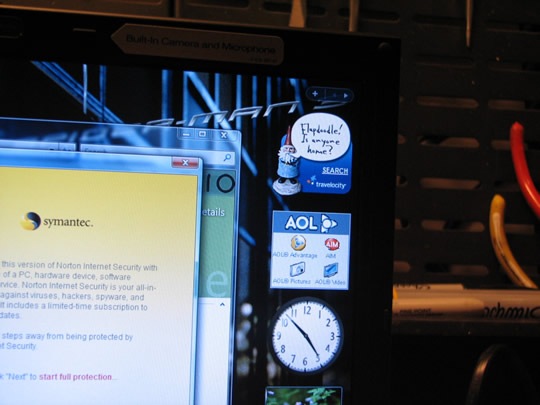 The preloaded software on the newer Sony laptops is a big problem. Big enough that it slows the computer down considerably. I spent over an hour uninstalling Norton Internet Security, Spy Something-or-Other, AOL, Napster, Microsoft Office Trial, a full version of Spiderman 3 that you can’t watch unless you pay to unlock it, and a whole bunch of other trial software. Read any other review of a Sony notebook that’s been released recently and you’ll read the same thing. It’s unbelievable. 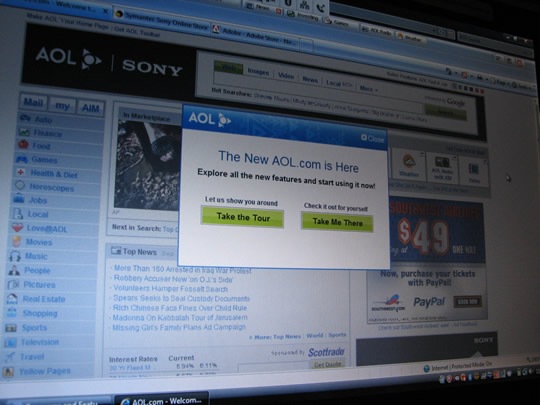 I knew going in that I’d have to remove all this stuff but were I a regular business user who purchased this notebook, I would have been a little curious as to why my computer was running so slowly and a little furious about all the intermittent pop-ups and system messages asking me to pay for stuff.

The best feature of this notebook, in my opinion, is the ability to flip back and forth between "stamina" and "speed" modes via a hardware switch above the keyboard. 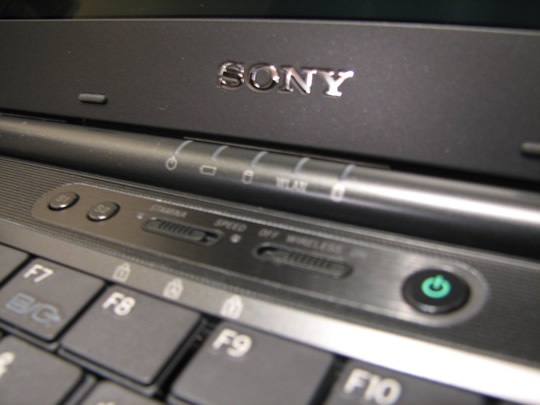 When I’m away from my desk I have it set to stamina, which gets me around 4 hours of battery life under moderate use. I can eke out Sony’s advertised six hours if I turn off the WiFi and Bluetooth radios and dim the screen down a fair amount. This mode uses the onboard Intel graphics processor to conserve power, which returns a 3.5 point gaming graphics score under Vista’s Experience Index. 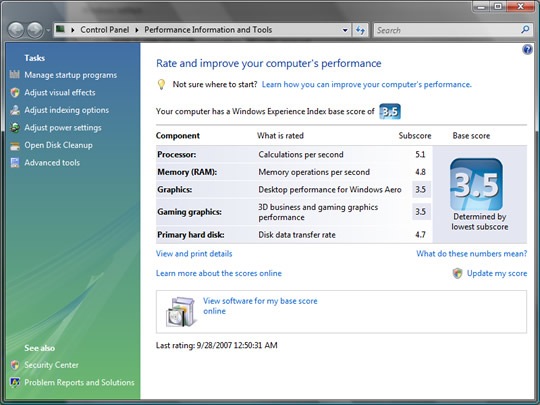 The stamina setting makes the notebook run impressively quick and nimble despite ratcheting some settings down a bit to conserve battery life. I’d actually been using this setting for the entire first week without trying out the speed setting because everything had been humming along just fine.

When I finally did try out the speed setting, I was even more impressed. Everything seemed to clip along a bit faster and the gaming graphics subscore jumped to 4.6 thanks to the NVIDIA chipset that gets used instead of the Intel one. I was able to run Halo 2, Tiger Woods 2008, and a few other new-ish games without any problems whatsoever. 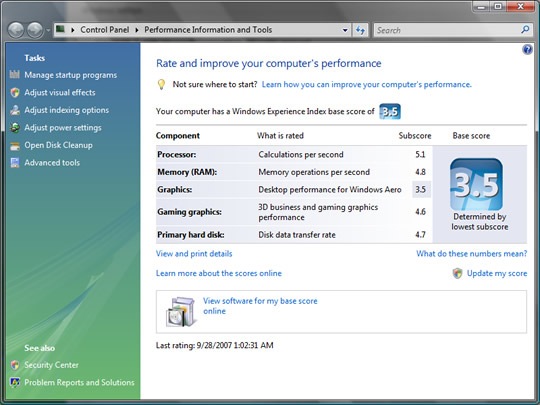 I now have the laptop on this setting when it sits on my desk during the day or any time I want to play games. The battery life got cut in half, which wasn’t a big deal because, again, the laptop is generally plugged in.

Unfortunately, switching between the speed and stamina modes requires a restart each time. This is to enable the computer to use the Intel and NVIDIA chipsets separately depending on the chosen settings. Also, I realize that using the Vista Experience rating isn’t the most thorough benchmark in the world but I thought I’d include it in order to show the difference between the two video cards.

I initially had my heart set on a less-than-three-pound notebook and, having owned a couple in my day, can tell you that there’s a big psychological difference between three and four pounds. That being said, at about four pounds, this notebook isn’t a pain to schlep around at all. For all intents and purposes, it’s roughly the size of a MacBook minus an entire pound. It’s a lot easier to lift and/or carry in one hand than a MacBook and the ultra thin screen is truly remarkable. Finally, while the MacBook is uniformly shaped, the Vaio is more of a wedge design. It’s 1.5 inches at the back and 1 inch at the front. 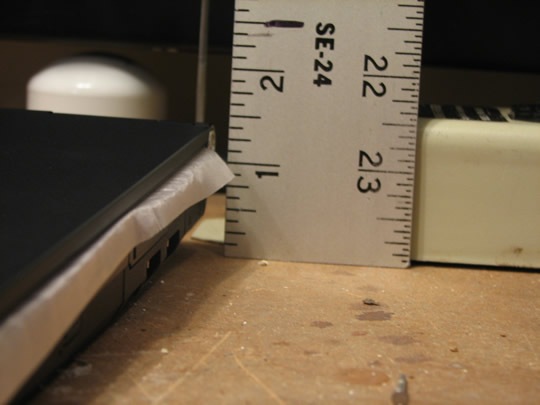 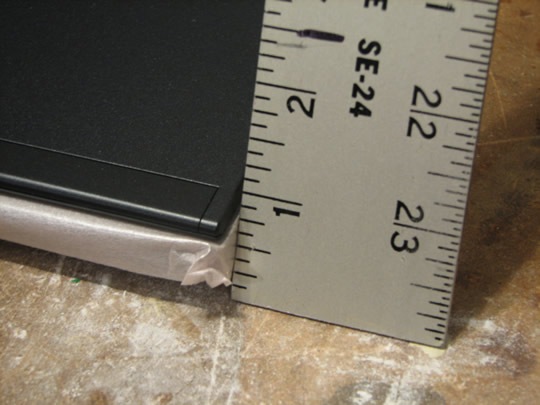 As previously mentioned, battery life is pretty good. I’ve consistently been able to average about four hours with moderate usage. It’s funny to get a low battery warning only to see that there’s still about an hour’s worth of juice left. All in all, I’ve been very happy with the battery life so far.

You’re either going to love the keyboard or you’re going to hate it. For starters, there’s a lot of vertical travel. It’s almost bouncy. I happen to like it but most people who have tried it have told me that it feels weird to them. It felt weird to me at first too, but I soon grew to like it. Each key presses down much lower than any other laptop keyboard I’ve used in the past. 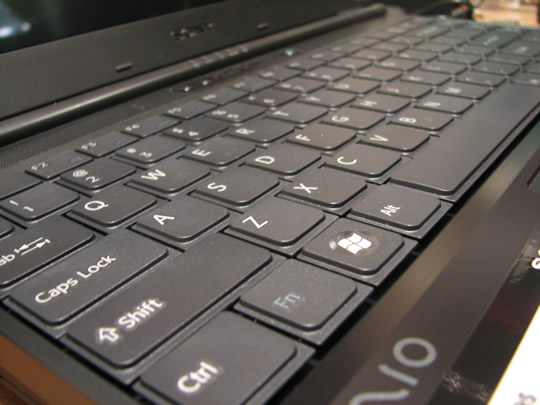 Also, it’s loud. Very loud. At a press conference, I had to gingerly sweep my fingers across the keys to keep it from drawing attention away from the person speaking. There’s a very definitive clickity-clack, reminiscent of the old mechanical AT keyboards although not nearly as loud or rough-sounding. It’s still noticeable, though.

The fingerprint feature is actually really, really cool. I use it all the time to store my usernames and passwords for all the different websites I visit and it saves a fair amount of time and repetitive typing to be able to just slide your finger across the reader. It’s the one feature I wasn’t sure I’d use all that much but I ended up using it all the time. 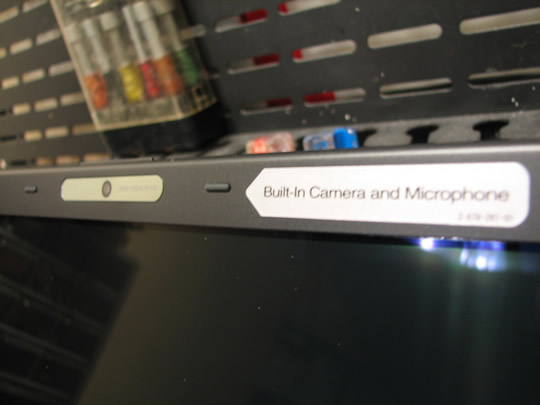 The camera is 1.3 megapixels and works as advertised. I haven’t used it for any cross-country videochats yet but if you’ve used the MacBook’s integrated camera, it’s a relatively similar experience. The microphone works really well. I was able to do an audio recording at the aforementioned press conference and the mic picked up everything crystal clear.

The speakers are fine — nothing special but they’re not tinny or cheap-sounding. This is technically a business notebook so I’m guessing that not a lot of emphasis was put on the sound portion, but it sounds decent for standard music and videos.

I’m so far very pleased with this notebook. It’s powerful enough that it’s replaced my desktop computer yet light enough to take with me wherever and whenever I need it, often without having to lug around it’s power brick.

At just over $2000 MSRP, it’s a bit on the expensive side and the crapware that comes loaded on it is abysmal at best. I wouldn’t recommend this computer to someone who wanted to get up and running out of the gate with minimal hassle. There are too many features that a non-technical user likely wouldn’t take the time to learn how to use.

It’s a great geek computer, though. The speed/stamina setting is awesome and the fact that it made me forget all about my desktop is saying something. It strikes a very delicate balance between speed, power, portability, battery life, weight, and features and, in my opinion, it does everything really well. For someone like me, there are very few compromises that I had to make with this computer. I love it. Best notebook I’ve ever owned.

If you have any questions that I haven’t answered, please let me know by leaving a comment below. 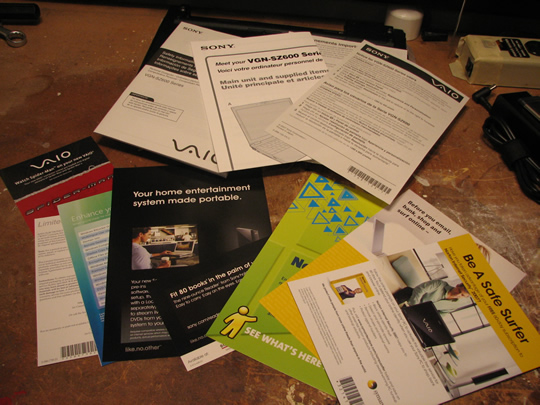 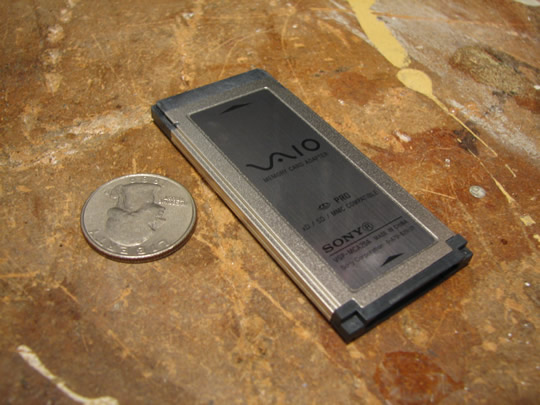 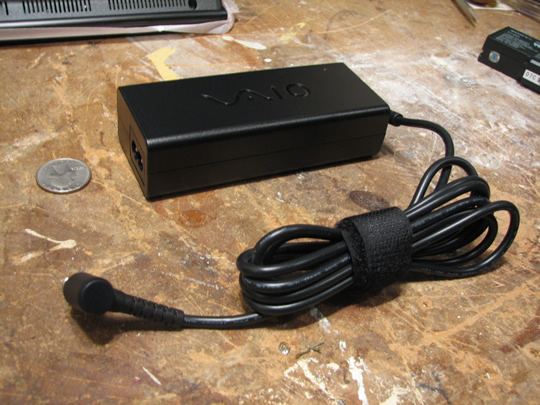 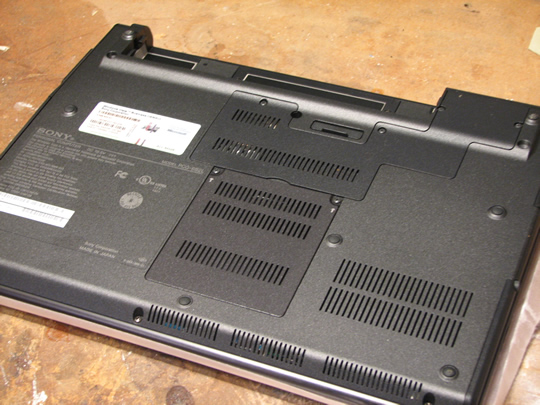 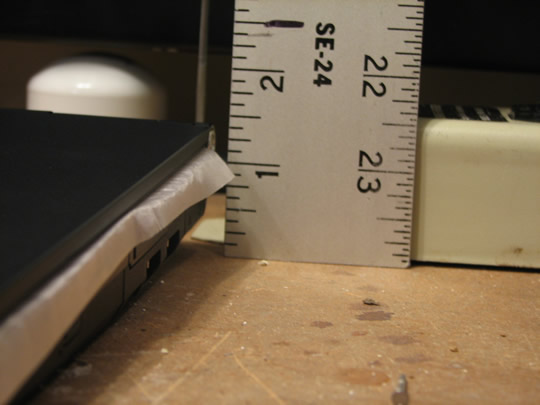 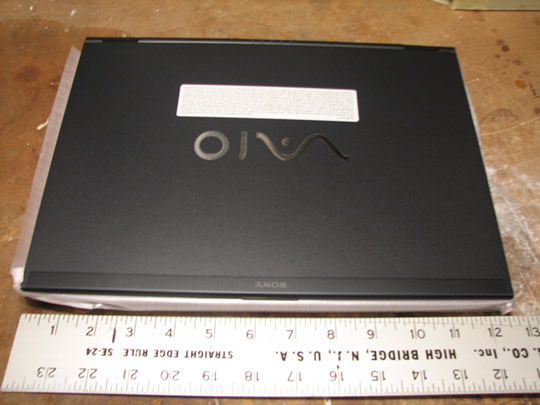 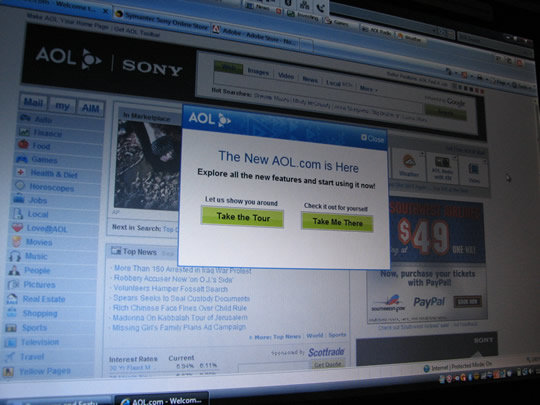 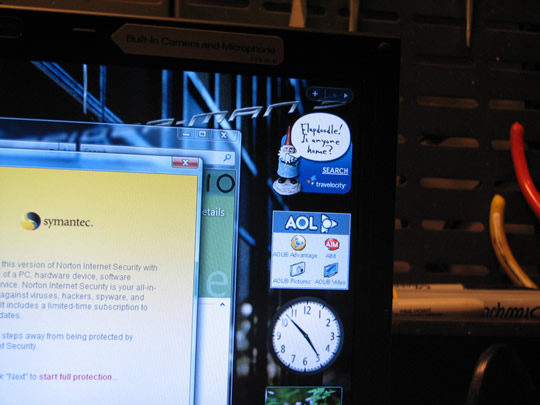 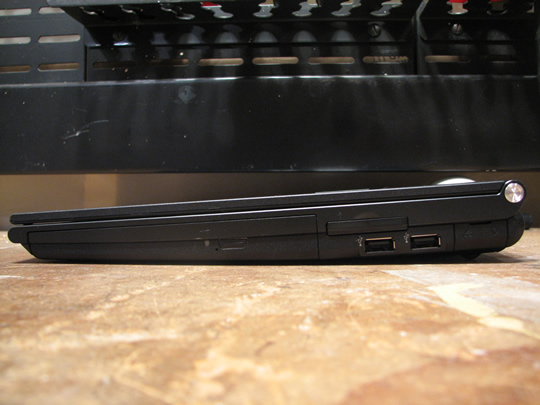 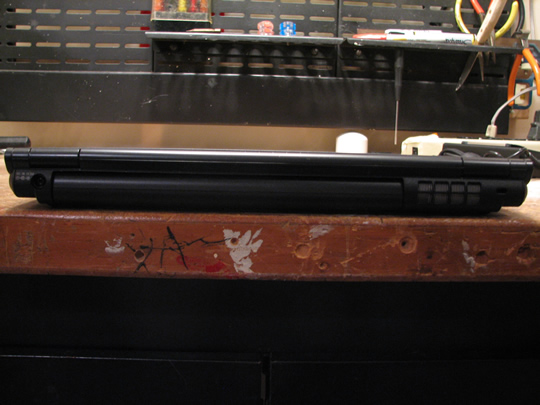 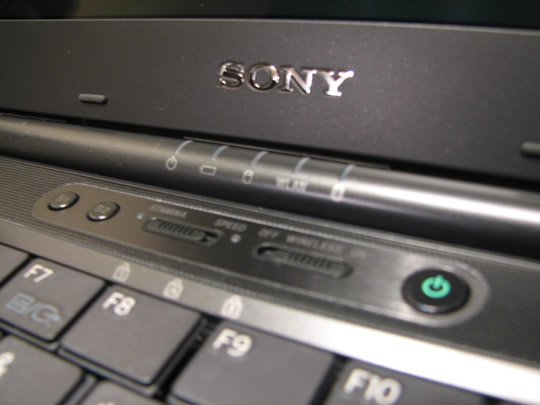