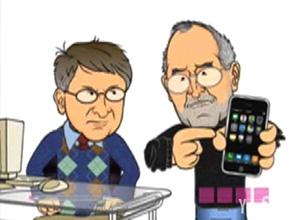 The iPhone Dev Team is shooting back at Apple and their threats to brick unlocked iPhones. The crack team of hackers developers have promised a tool to restore your iPhone back to a factory-like state in the next week. The following statement has been altered for grammar and spelling.

Based on download numbers, the iPhone Dev Team believes that, worldwide, several hundred thousand people have unlocked their iPhones. That number continues growing every day. The removal of the lock, a bug, was a major step forward in the iPhone development. It made the iPhone free and useful to anyone, not only to those in certain countries.

Apple now announces that the next firmware update, expected later this week, will possibly break the handset of all of us free users in the World. It speaks of “damage” done to the firmware and “unauthorized access” to our own property, The removal of those firmware problems, which were built in in favor for AT&T, does not cause “damage” as they want to make us believe.

We will provide you with a tool in the next week which will be able to recover your nck counter and seczones and even enables you to restore your phone to a Factory-like state.

In the meantime we advise you not to update your free iPhone with the upcoming firmware. Wait for the next version to be fixed to work properly with your carrier and not break your phone.