Four minutes left.
After a little bit of confusion and a stop over at the Microsoft offices in NYC I finally made my way to the Best Buy in midtown for the midnight launch event for Halo 3. Seeing the hundreds of fans waiting in line for a video game was beyond anything I could fathom. The energy and excitement could be felt two avenues away, which is a long distance in case you’ve never been to Manhattan. There was a lot of waiting around, though. I got bored for a while, but that didn’t last very long since a loud rumbling came from the down the street.

The Marines rolled up 5th Avenue around 11:40 EST in a Hummer and a few Mongooses. No signs of the Warthog, though. While Master Chief exited the Best Buy to receive the ammunitions box full of games. After the transfer he pulled the first two fans from the line to receive their copies. Then all heck broke loose. Ok, not really, but I’ll admit the crew at BB did a great job of crowd control. 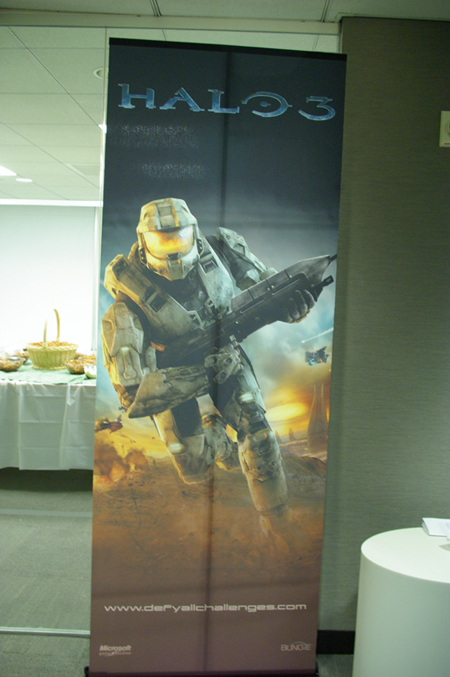 The Marines were whizzing by way too fast and I had too many people in front of me to get a decent shot.

They’re making the transfer. They were so dramatic about it. Dorks.

The first two guys in line. Darnell Johnson and Uchendu Nwachkwy in the hat. I think the little guy was crying at one point.

Ludacris showed up and took a few photos with Master Chief and fellas.

The Halo booty. I was tempted to swipe it and run, but Master Chief and the Marines probably would have beaten me into oblivion.

3rd in line! The chaos begins.

This girl was stoked and she was cute. Again, too many people pushing and shoving to get a decent shot.

Master Chief had to pay for his Legendary Edition!

Even the King stopped by for the festivities.

Well, I hope everyone got their copies wherever you are. As of right now there are 119k Halo 3 players online and 23,736,737 UNSC Campaign Kills logged. Now where’d I put my copy?