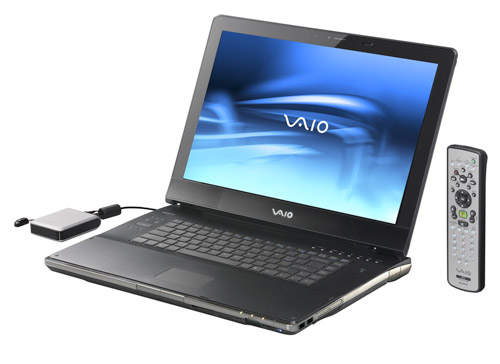 While I wouldn’t necessarily want to replace my desktop with a laptop, I surely wouldn’t want it to be a Sony VAIO since it runs Windows and we all know how much CG hates loves M$. Wouldn’t you love to have a Blu-ray card and CableCARD? I know I do, which is the case for the 17-inch VAIO AR series notebooks that also come equipped with an Intel Core 2 Duo T7250 and T7500 processor. Each of the three models sport a 160GB HDD and GeForce 8M video card.

The AR630E is the minimalist of the bunch with just Blu-ray for $1,700. The AR660Ulets you hook up to your cable with the built-in Cable CARD for $2,400 and the AR690U is the all encompassing model with both for a mere $3,300. Me thinks these are a tad too expensive for meself.