Having just bought a Mac after ten years of Windows, I feel as though I have a heightened appreciation for products and services that are pleasurable to use. And while I love websites that implement Ajax or Flash effectively, few online destinations can match the usability of a well-designed desktop application. 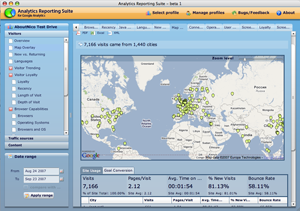 That’s why I found Google Analytics AIR beta, publicly released on September 17th, to be such a breath of fresh air (no pun intended, really).

This unofficial AIR version of Google Analytics delivers the functionality of browser-based Google Analytics but with greater usability and a richer experience. If you haven’t heard of AIR (once named “Apollo”), it’s a platform developed by Adobe that enables web developers to deploy their web services outside of the browser so they function more like traditional applications.

This is the first AIR program that I have tested that really gets me excited about the platform. As a beta program, it’s not perfect (I ran into a few errors), but overall it has been executed very well. It’s also nice to see such a full-functional program developed using someone else’s API (in this case, Google’s).

Check out Google Analytics AIR beta and give the developer, Nico, your feedback to help make this thing even better. If you don’t already have AIR, you need to download it to use any AIR-base applications (as with Flash).

Correction and Update: Google doesn’t actually have their own API for Analytics; Nico says he had to make his own to build this program (not exactly sure how that works).

He also says that both Adobe and Google are involved in this project now. Adobe has included the application in its Showcase program, and Google product managers and engineers are providing him with feedback and helping him make it more secure.

Nico says that beta 2 of Google Analytics AIR will be available around the time AIR beta 2 is released to the general public. He’s currently focusing on improved international support and the integration of AdWords.