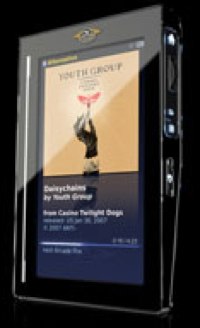 CrunchGear is reporting that users of the yet to be released Slacker MP3 player will be able to transfer their ‘personalized stations’ to the player with a single click and refresh them via Wi-Fi or USB.

Slacker’s basic music service is similar to Pandora, providing based music player that customizes stations based on whether you like or dislike specific tracks that are free to use and ad-supported. Their iTunes-like software organizes the music on your computer, plays the same radio stations as the web based version, and will sync to the MP3 device.

Slacker has also announced agreements with major labels EMI Music, Universal Music Group and Warner Music Group to make the labels’ content available to listeners on the Slacker Personal Radio service. Slacker, which had previously announced a similar agreement with SONY BMG now has agreements with all four major labels that enable listeners to choose from a vast catalog of artists to play on their personal radio stations wherever they are.

The one-click announcement and the record deals are important as it delivers free legal music to Slacker MP3 players, via a one-click Wi-Fi interface; a big marketing advantage over Apple’s iPod.

Slack has taken $53.5 million in funding over two rounds, the last round of $40 million closed 1 June.