IAC’s Zwinky has been carefully growing their pre-teen social networking service. It started out as an online avatar creation tool. They later created a virtual world where those avatars could socialize. Usage of the service has been growing, under heavy advertising, as well. They currently have over 9.5 million registered users with 4.6 million active users per month that spend an average of 64 minutes a day in their virtual world, Zwinktopia.

Zwinky is now expanding the service to their users pocketbooks, or rather those of their parents. The site is now letting users purchase batches of “Zbucks”, their virtual curency, instead of having to earn them. They join a growing group of other tween sites with paid virtual economies as well (Club Penguin, Habbo Hotel, Gaia). Users can purchase them using PayPal or credit card at a rate of about $10 for 2,000 Zbucks. With the Zbucks, users will be able to purchase their own avatar accessories or furnish their virtual rooms in Zwinktopia. Zwinky is not only making money from the Zbucks, but also through sponsorships and sales made through the virtual goods.

So far users have spent over 500 million free “Zbucks” on the site since launch. There’s no telling how strong the uptake of the new paid currency will be, but other services have shown a clear market for virtual goods. The passion around World of Warcraft drove a black market for virtual gold. SecondLife has also driven a paid virtual economy. While virtual goods seem hokey for outsiders, startups that create a meaningful environment find their customers willing to pay to save time earning currency or get at exclusive items. 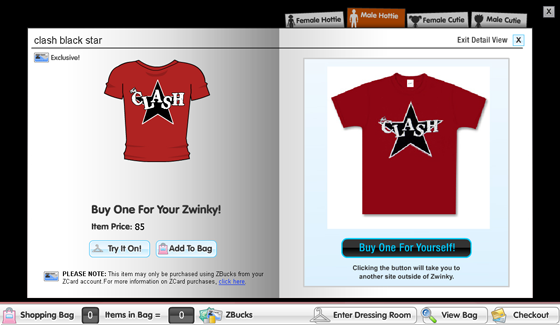