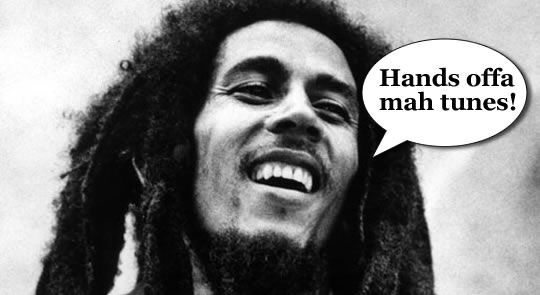 New developments in the previously reported Bob Marley ring tone fiasco. Seems that Verizon removed most of Marley’s 44 ring tones from its site yesterday but, after the Marley camp went on to state that it was “infurated that Verizon would go around the estate and initiate partnership with Universal”, Verizon put ’em all back up today.

The Marley family had threatened to sue Universal Music Group (which owns the rights to many of Marley’s popular songs) citing that giving Verizon Wireless exclusive use of Bob’s material would be tantamount to an endorsement deal, something that the family was opposed to.

In true giant-music-company form, Universal then deemed that Marley’s music would become available to ALL cell phone carriers and said that it had issues with the fact that “the Marley estate has chosen to take such an extreme and meritless position that a customary promotional campaign highlighting the availability of Marley mastertones somehow constitues an ‘endorsement’ of Verizon…”

Family spokesperson Chris Blackwell is leading the charge, saying that the family is planning to reinstate its original suit against Verizon and is now promising to file a separate suit against Universal in the coming weeks. Blackwell owned Island Records, Marley’s original label, which he sold to Polygram Records, which over the course of the years wound up getting folded into Universal.