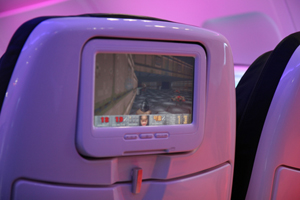 Virgin America has partnered with AirCell to bring Wi-Fi to VA’s entire fleet in early 2008. American Airlines inked a deal earlier this year with AirCell to bring Wi-Fi, but VA seems to be a bit more proactive. I’m pretty sure I’ll be taking VA for every possible flight in the US. Getting back to the important stuff. You’ll have two options to quench your Net fix by packing your own device or through the in-flight entertainment system dubbed Red.

Red is going to rock and here’s why.

Just to preface, I’ve been on flights with entertainment systems that have the ability to interact with other passengers. That’s all well and good, but like I said before, Red is going to rock. You’ll not only be able to interact with passengers on your flight, but with passengers on any other VA flight. This allows you to keep working with colleagues across the country if you have a super important presentation or meeting coming up. The possibilities seem endless and I’m excited to see what happens in 2008.