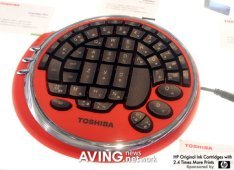 Anyone want to take a stab at what kind of drugs Toshiba was doing at the R&D lab when they thought up this product? Anyone? This “gaming keyboard” from Toshiba is the company’s first and hopefully its last. Sporting 55-keys and a circular design, the keyboard is supposedly called “Wolverine” even though it doesn’t look a thing like the X-Man.

Designed with RTS and FPS games in mind, I could see how it could be a tad useful, but what if I want to type a message to my friend in-game? Yeah. Thought so.