Ah, PayPerPost. The controversial Florida-based startup that is leading the effort to tarnish the blogosphere makes another PR blunder. And this one’s a whopper.

The company has been chronicling their startup days on a video blog called RockStartup. There have been some embarrassments before with the video blog – such as when a viewer noticed that the company had purchased $700 chairs for employees with investor capital and then yelled at a painter for standing on one (CEO Ted Murphy, pictured above, later said the chairs were purchased used).

But the most recent episode is where the company really takes the cake. All employees of the company were taken on an all-expenses-paid trip to Club Med, where as far as I can tell they spent their time getting drunk and dressing up as Native Americans, complete with lots of red face and body paint (something many Native Americans find both racist and offensive, and which has been equated to Blackface). The company also hired something called a “Creative Thinking Coach” to guide them through the whole experience.

The only question I have is…Did Draper Fisher Jurvetson, the main VC behind PayPerPost, really greenlight this debacle? 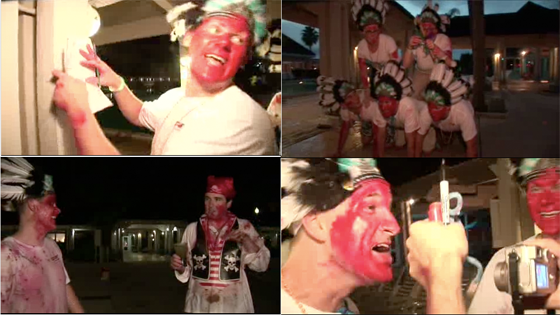