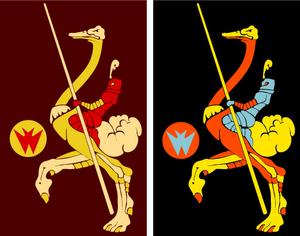 We don’t get much news from the good dorks over at Ain’t It Cool News, but this one is definitely of interest to CrunchGear readers. There was a very popular game in the 1980s called Joust, where you controlled an ostrichy bird thing and a guy on its back with a lance. You’d bounce around and joust with other people on similar rides. Somebody thinks it’d be a great premise for a “Gladiator meets Mad Max” type movie.

Ok. I am so stoked right now, it’s nuts. After Transformers, I thought we were at the end of geek cinema. I was wrong. I’m first in line.