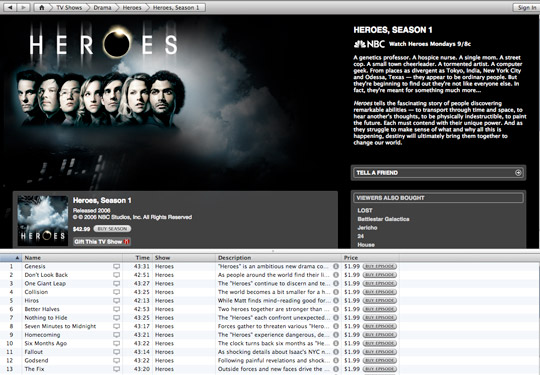 Grab ’em while you can

Great, another edition of “My member is bigger than your member.” NBC and Apple agreed to part ways last night, with NBC refusing to cede to Apple’s demands as it relates to publishing its high art on iTunes. In other words, you’ll no longer be able to download NBC shows off iTunes once December rolls around. (The previous contract runs through December.)

Way to look out for the customer, guys.

Dumb move all around, I think.

Apple needs as much video as it can get, especially if it announced, as we all think it will, video iPod of various shapes and sizes next week. NBC, on the other hand, completely loses the ability to say “Go to iTunes and download our crap!” Now it’ll be more like, “Go to nbc.com/tv/shows/fall07/mondays/*show_name* and wait for our specialized, DRM-encumbered player to load. Mac users, you’re S.O.L.”

There’s already speculation that other media companies like CBS and Discovery will grow a pair and demand that Apple cut them a more favorable deal when contract negotiations start up again in the months ahead.

And you know what, media companies, for all your piracy concerns vis-à-vis iTunes, how about this: it’s still painfully easy to log onto ThePirateBay and grab any of your dumb shows at will. That consumers choose to *pay for the convenience* of downloading from iTunes should not be overlooked.

But I’m sure you will anyway.