There are several startups gunning to be the top Facebook ad platform: Lookery, FBExchange, RockYou, and Cubics. SocialMedia also became one of the early players when they launched their Appsaholic advertising network soon after F8. Previously only a select group of developers were able to sell ads through the service. However, they’ve now opened it to everyone through a self-service model, and some developers are making some real cash off of the service.

Appsaholic isn’t banner advertising like Lookery offers, or developers can get through traditional ad networks. Instead, Appsaholic sells click-throughs to other Facebook applications across their network of affiliated sites. It’s similar to FB Exchange’s link exchange model, but has more features (reporting) and seems easier to use (FBEx requires separate filings, Appsaholic can use PayPal). They have plans for other models as well, including a advertising that rewards users for engaging in advertisements.

Developers become a member of the network by tracking their application on Appsaholic and adding some embed code to their application. The embed code adds an iFrame that serves paid links on their affiliates’ applications. The links go to the highest “AdRanked” advertising developer on their live bidding market. AdRank is determined by multiplying two factors, the offered price per click, and the advertising application’s quality score. The quality score is based on a function of the application’s clickthrough rate and viral growth within the network. The idea is that higher quality applications should be rewarded with cheaper advertising. This dissuades disliked apps from spamming the service.

So, for example, a developer whose application has a quality score of 60 and is willing to bid $.10 per click, has an AdRank of 6. Since ads are served in AdRanked order, the developer could boost his AdRank and position in the queue by bidding a bit higher. Currently PPC rates are 10 to 20 cents. Appsaholic takes 12-30% of that revenue.

While that doesn’t sound like a lot, people are still making some significant cash off the platform. Click through rates vary from 0.2%-3.0%, effectively paying about $0.60-$3.00 for every thousand visitors to your application. SocialMedia’s Seth Goldstein is optimistic and only sees these rates as the beginning. 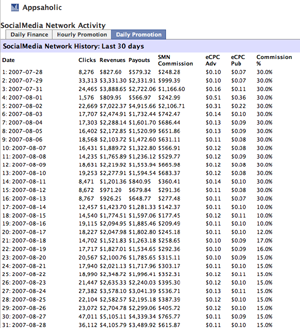 The company cites Greg Thompson as one of their recent successes. Thompson, a contract programmer from London, Ontario, is known for making the popular Facebook application My Aquarium. The application has about 2.2 million users. Within less than a day of running SocialMedia’s ads Thompson made over $500. While CPM rates on VideoEgg can upwards of $8.50, Thompson found they had less inventory. Over the past three months, Thompson has made around $100,000 in Facebook advertising overall.

SocialMedia has shared their network’s revenue to date viewable to the right.

While Facebook hasn’t clobbered an application yet, they’ve definitely laid out some advertising plans of their own. Facebook has also shifted away from installs to engagement, thereby improving how users can discover applications and perhaps undercutting the need for affiliate linking to get big. There’s no telling if Facebook will directly take on advertising within applications. Playing in Facebook’s garden may be risky business, but Facebook need only look to MySpace’s dwindling approval amongst the developers to see what a heavy hand can ruin.