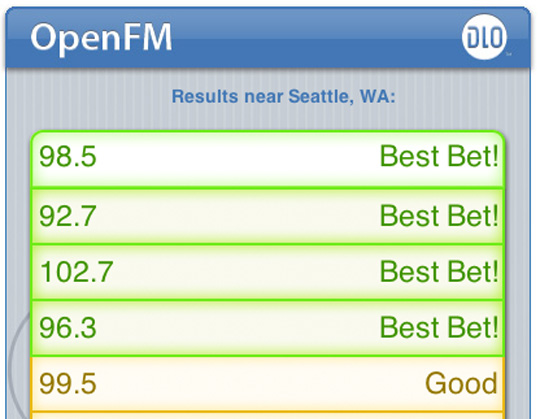 You know that iPod FM transmitter you got for Xmas a couple years ago? The one that’s in your glovebox collecting dust? The one you tried a few times but gave up because you couldn’t find a clear channel? Find it, because DLO is offering a new, free service called Open FM that might just make it handy after all.

For those of you in the sticks, it’s not an issue. But for those of us in the city, there are so many crappy radio stations that it’s hard to find a clear channel (pun intended) to transmit your iPod across. Open FM is a directory of FM frequencies rated by how little interference they each have by zipcode or city. Put in where you are, and the very nifty tool tells you which stations to broadcast and tune to for best results. Very cool.

It’s free, the idea being that it’ll sell more FM transmitters if people are less frustrated. We like the idea and can’t figure out why nobody thought of it sooner.