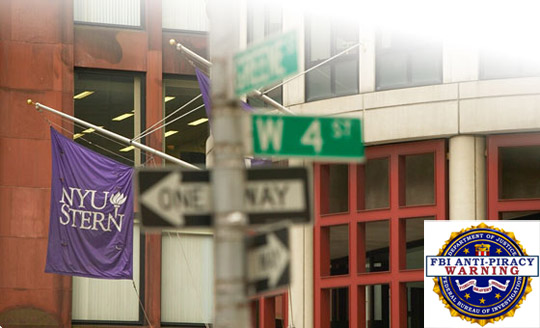 Don’t ask, don’t tell. Oh, but if the RIAA catches you, your ass is grass. That’s essentially how New York University, known as NYU to the Haley Joel Osments and Spike Lees and John Biggses of the world, treats piracy on campus. (I’ll be a senior there this fall.) I logged into the school’s main portal today to determine whether or not my $73 zillion in loans had cleared—they have! Debt rules!—and found an interesting little note from one of the higher-ups here. “A Note On Illegal Downloading,” a title that just screams faux academics, basically tells new and returning students this: look, we know you download music and movies, just don’t get caught. Because, hey, if you do, you’re on your own.

I’m sure a few of you are heading off to school for the first time, so I thought I’d share how mine handles the scourge of piracy.

The meat of NYU’s stance is as follows:

If the RIAA believes you are involved in illegal downloads or distribution of copyrighted materials and submits a valid subpoena to NYU seeking your identity, the University will comply with the subpoena and furnish your name and contact information to the RIAA’s lawyers.

In answering those questions, the University appeals to what Abraham Lincoln once called “the better angels” of your nature and to your commitment to the culture of scholarship.

But, just as you abide by certain standards of behavior for scholarship and for University life, so, too, should you abide by high standards when it comes to the intellectual property of others on the Internet.

My response? LOL, NYU! In my three years of being a student, two of which I had an NYU-provided Internet connection, I must have downloaded, you know, a couple of albums here and there, maybe a movie or a game or two. These are low estimates, by the way. It’s not like I was coming home after class and grabbing high-def rips of 24 or the new ATB album or anything. Or, maybe, let’s say, whole seasons of TV shows I had no interest in watching just because I could. (NYU’s connection is pretty great, as you might imagine.)

For all of my downloading, I never once got a warning from the school, the RIAA/MPAA, anyone. Terabytes of data, precious content, zipping into my PowerBook and iMac day in, day out. It was amazing.

Interestingly enough, the IT department reprimanded my roommate last year for downloading the movie Smokin’ Aces. I say he got what was coming to him for downloading that garbage, but I just found it ironic that he got caught—he was a jock-type casual downloader, I mean to say—on one of his only digital forays. He used Direct Connect, which may explain why the polic… whoops, I mean MPAA, found him out.

So in conclusion, NYU doesn’t want to know what the hell you do with your Internet connection. If, by chance, one of the extra-judicial cartels find out that you’ve downloaded its crap then you’re in trouble. May I suggest that, if you insist on downloading, you use private BitTorrent trackers, which add only the thinnest veil of protection, PeerGuardian and turn on Azureus’ encryption feature. In other words, do as Vince does.

Any of y’all still in school? Is this “fingers-in-the-ears-eyes-closed-shut” a common reaction to your rampant downloading?

Stay safe, friends. Don’t let the boogeyman scare you away from your hobbies. Besides, college is all about experimentation.

A Note On Illegal Downloading [NYU]