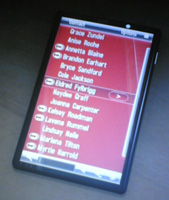 Get ready for the next bout of xPhone madness. A HTC insider sent us a tip this weekend about an upcoming gPhone coming out of Taiwan that should launch Q1 2008. Google is currently assessing over twenty HTC models and refining its final handset design and will create a special version of Google Maps, compatible with built-in GPS, and compatibility with Gmail and the calendar app. There is also some talk that Samsung will be releasing gPhone handsets as well, but that has not been confirmed.

One extremely interesting point? Google Talk will become a part of the phone, adding VoIP capability to the hardware.

The software should be like Yahoo! Mobile, a similar application that leverage’s Yahoo’s mail and search solutions for handsets. However, that Google is going ahead with an actual hardware launch and may be using its own OS — the tipster mentioned WinMo 6 but there is a better chance that they will be using a Linux-based OS — and hardware is quite a shocker. More as this develops.