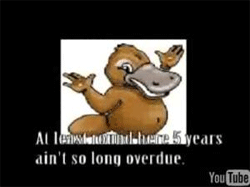 Google Blogscoped points to a Google video created by a Google employee (now private) that shows the Gdrive Platypus icon overlaid with the lyrics, “I’ve been ready to launch my product since 2002 … At least round here 5 years ain’t so long overdue.”

Philipp Lenssen suggests that perhaps Google’s online storage solution might have been canceled, but not surprisingly no one at Mountain View is confirming a thing. It does raise the rather valid question: What ever happened to GDrive?

Our GDrive coverage goes back 18 months with Google including references to “Google Drive,” “a place for users to store 100% of their data online” in a company presentation. In April 2006 there was speculation that Microsoft would launch Live Drive prior to GDrive. In October 2006 there was a confirmed GDrive client being used by Google employees. Ten months later and there is nothing.

What is perhaps stranger in a market sense is Google’s continuing slide from being the market leader in online storage to becoming a potential minnow. Google set the standard with the then unprecedented 2gb storage for online mail with Gmail. Today Google’s 2-3 gb of storage sees it lag behind Microsoft who recently announced 5gb for Hotmail, and Yahoo and AOL who provide unlimited email storage. Microsoft has already launched its online storage solution, although reviews, including ours, were tepid.

So is the GDrive more endangered vulnerable than the Platypus it uses for its logo? If you’re a Google employee and would like to set the record straight on or off the record drop us a line. We’d also like to see that video back up on a non-Google controlled website.