Hispanic social network TierraNatal launched in July with a model that seeks to reunite Mexicans where ever they live.

The bilingual site focuses on location based networking with users being asked to specify their place of birth (or hometown) in Mexico. Users are encouraged to use the service as a way of keeping in contact with friends and relatives who might have moved elsewhere, such as the United States. Over 300,000 Mexican towns and cities are listed.

Design wise it’s one of the better social networking sites I’ve seen in recent times. The usual array of social networking features (profiles, pics, blogs etc) are combined with some decent looking graphics and a functional layout that works well.

TierraNatal was founded by Liliana Townshend and was developed by San Diego based Digital Telepathy. 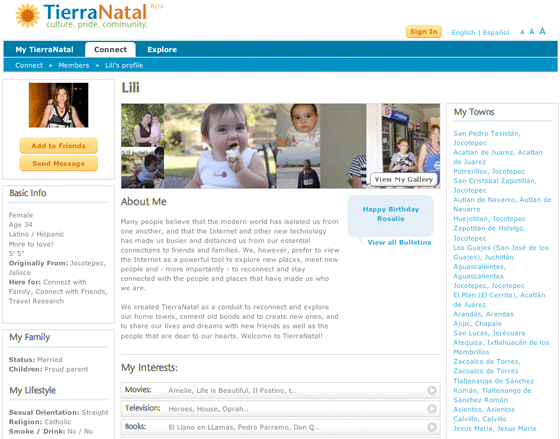