Paul Graham started off the event briskly after an initial mixer, encouraging investors to close deals fast on the 11 week old companies.

Here’s a look at the presenters (note, some of the 19 companies declined mention in this roundup):

We announced Anywhere.FM’s launch earlier last week. They compete in the online music locker space. However, I find a lot of these sites are more a niche segment of the storage market than a full application.

Anywhere.fm is a more consumer friendly music storage solution and has set dead aim at being an online version of iTunes. Anywhere.FM’s site lets you upload your music collection onto their site, create playlists, and play them back anywhere from the web. You can even listen to your friend’s music on a “Buddy radio station”. You can easily start your library with an iTunes uploader.

Over the past two weeks, they have received over 125,000 visits and had over a million songs uploaded to the site.

Today they expanded on their monetization plans, which include advertising, affiliate sales, and premium accounts. They plan on inserting audio ads into your music stream and are in talks with TargetSpot to supply local audio ads. The player’s Buddy radio feature will serve as a discovery engine, which they can sell music through and generate affiliate fees. Finally, a paid premium account will provide higher quality bit rates and other TBA features.

DropBox is another entrant into the online storage market. They are creating a transparent file management system (Mac/Win) that aims to: sync your desktop files on the web, back up files, provide access anywhere, and make files easy to share.

Although they are still in private beta, they showed an example of their product for the Mac. For the demo they showed how files stored in their desktop Dropbox folder were accessible and synced online. Your Dropbox files are backed up online, with a version history to provide easy rollback, and recovery in case you delete them from your desktop system. The files can also be shared via a permalink.

The demo looked slick although they were not able to disclose any details about the scalability of their backend in the short 7 minute presentation. See our previous coverage of the online storage gang.

Versionate is taking on Microsoft Sharepoint, online offices, and the wiki market with their new collaborative document editing application. We covered their launch earlier.

Once you upload your documents to Versionate, you can search your content, control access rights, and edit them in the browser. Currently only Word documents are editable online. Every version of your changes is saved in wiki style. They support viewing for Word, Excel, PDF, OpenOffice, Powerpoint.

Versionate will also be offering a self-hosted version for customers concerned about data security and are pursuing desktop/web integration.

Adpinion is looking to fix banner advertising. To do this, they are helping ad networks target advertising by allowing visitors vote on the advertising preferences. Through the voting, Adpinion can determine what groups of ads go with what groups of users and sites. Since launch, they have been approached by over 180 businesses considering integrating Adpinion into their networks, including CBS.

File sharing is very popular (13 million users connected to eDonkey at any time). However, it’s also very illegal. Reble music is looking to make file sharing legal by avoiding a lot of the legal issues that got a lot of other startups sued into oblivion (unless you’re in Russia). To ensure this, they’ve been talking with the music industry from the very beginning.

The biggest legal complication Reble will avoid on their P2P network is downloading. Instead, users will use their desktop application to stream music to their computers from their friends. Streaming from friends computers also avoids the internet radio limitations imposed on other legal streaming solutions. Yet it still leaves recording artists open to piracy because stream capturing software is available for people who know what they’re doing.

Their end goal is to use the service as a music discovery engine and drive affiliate sales.

One of the most championed features of blogs is the conversation. However, commenting systems on a lot of blogs are still somewhat lacking. Disqus is another startup looking to fix this by enhancing the comments. Disqus supports full moderation, spam and troll filtering, voting, threading, and more importantly a forum. For each post made on your blog, Disqus will generate a forum on their server, where users can continue the conversation in depth. They plan on monetizing through a business class version of the product.

As more blogs add the feature, Disqus will also be able to connect the conversation across blogs. Their plugin is currently live on Fred Wilson’s blog. We expect to see more when they officially launch.

Fauxto is an online version of Photoshop made in flash. The functionality is pretty amazing and includes layering, all sorts of tools, and effects. For the demo they live edited a photo of Steve Ballmer from the web by adding a Google logo to his forehead and changing his eyes to a nice baby blue. You can save the edited photos to your desktop or the web.

Over the past three months they’ve been live the site has grown to 56,000 registered users without any promotion. Their initial plans for monetization include licensing their technology.

Fuzzwich is one of my latest internet addictions. It’s a a dead simple way creating and publishing animated shorts out of a pre-generated cast of characters and backgrounds. They add more and more each day. Since launch users have viewed over 50,000 animations and added a new cast of animated characters.

Today they’ve previewed a new advertising engine through customizing their characters through branded goods. For instance, you can dress your character up in Gap, or pimp your ride with the latest web bling. Because they control all the content that goes into the videos, it seems like a more effective way of incorporating advertising into user generated content than with social video. New creatives can easily be added and hyperlinked to connect to purchase points. Lately indie music labels have contacted also them about possible music promotions.

The Slapvid guys have changed their startup and come back as a hardware startup, Cloudant. Their router promises to take full advantage of your bandwidth by simultaneously downloading multiple parts of a file. They say this is possible for a large number of the files you download online because of the range request abilities built into the HTTP spec. This means that your router can open multiple connections to a site and download multiple chunks of a file in parallel.

The router will also have other advanced features, such as network security out of the box, creating a peer to peer content distribution network amongst the routers, and embedded applications pre-installed on the box. For the demo, they showed their router download a large high-quality image file in about 16 minutes, compared to the Y Combinators old router taking an hour.

They plan on releasing a beta in May of 2008 and are seeking a 500K investment to get the production going.

Mark Hendrickson took some photos of the event with the help of Babak Nivi’s (Venture Hacks) iPhone. Click the image below for more. 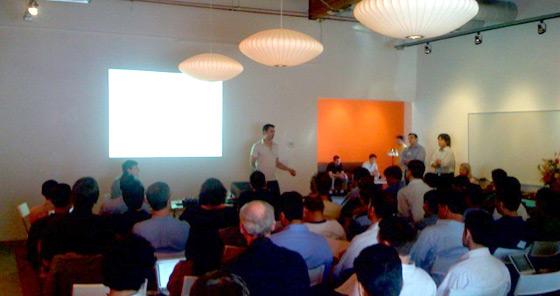