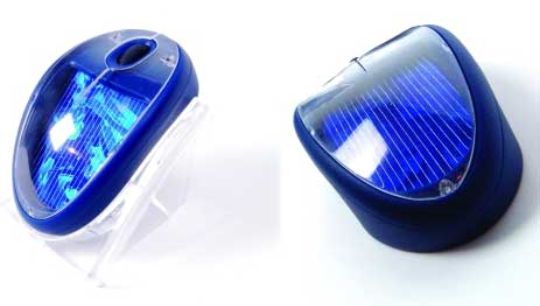 The Sole Mio is a solar-powered wireless mouse currently being developed by the Netherlands Organization for Scientific Research. I can’t tell if it’s Bluetooth or RF (maybe they haven’t gotten that far yet) but it uses about 20mA of electricity while you’re using it and it holds 300mAh when fully charged.

I like the idea of a solar-powered mouse, but it’s gotta work. I’ll use a comfortable corded mouse over a cheap-feeling wireless/solar/whatever mouse any day. At first glance, this mouse looks cheap, but it’s still a prototype so I’ll reserve judgment until it’s available.

You best be sitting by a window (like me!) or you’ll be out of luck. If the Dutch can get the technology working well enough to license to other devices, your very-comfortable corded mouse might just be offered as a solar version in the near future.