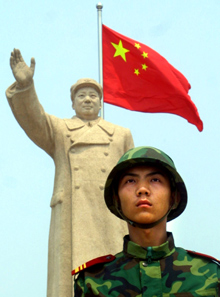 To celebrate the founding of the People’s Liberation Army, China Unicom is offereing its subscriber base film clips of the Korean War and pictures of weapons and/or military figures. So why is China Unicom offering such a strange variety of content to celebrate? According to company official Yu Peng,

“I believe it will be popular since we have so many military fans in China.”

The PLA has about 2.25 million active troops, which would be huge anywhere else in the world, but the population is hovering around 1.4 billion or so. Does anyone else smell propaganda? Customers can also receive military news directly from the army’s newspaper for just $1 a month.

But it’s not about the money at all says China Unicom,

By doing it, we are celebrating the PLA’s 80th anniversary. And in the process providing more healthy content through mobile phones.