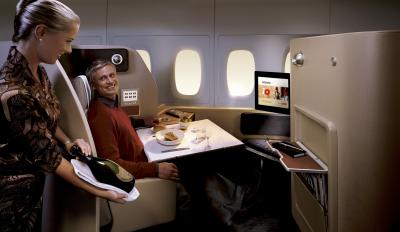 If the domestic U.S. airlines were as forward thinking as Qantas, we’d be so much better off. At least the geeks would be. Sure you can use SeatGuru to find out which seats have outlets or pull out your Maglite just to check, but wouldn’t it be easier if every seat in every class had power and Wi-Fi?

Qantas has announced a new line of Airbus A380s will be fitted with power outlets starting next August and a ‘premium economy’ cabin will be retrofitted into the existing fleet of Boeing 747-400s to offer power outlets, but you’ll have to wait till February.

It gets a boat-load better because Wi-Fi will also be offered in every class and if you forgot your laptop then fret not because the in-flight entertainment units will offer Web and e-mail access. Of course there has to be some disparity between the classes and those wankers up front will get USB to view in-flight entertainment content and recharge batteries as well as modem ports.

Wireless data will also be offered to GSM mobile phones. Pricing is still undetermined but “seatback instant messaging could be $5 for unlimited use on your flight, Web e-mail will cost $8 per flight, with attachments extra, and there will be a measure of Internet access. Laptop users would have Wi-Fi access to the Internet and VPNs.”

So how fast will the connection be? Unfortunately, it will be a paltry 432Kbps, which doesn’t mean you’ll be cruising in style if everyone else is using it. Bummer, but it’s better than anything else out there, so don’t complain!