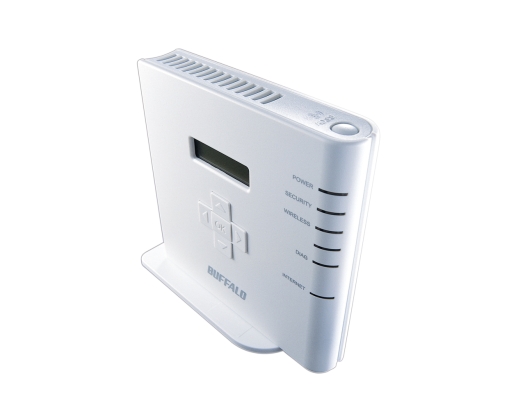 Back in the day, I used to write about a lot of Buffalo gadgets that tended to be Japan-only. The Wi-Fi Gamer, however, will appear on our shores sometime in August. It’s a gaming-centric router-like device that tries to address a problem gamers no doubt have encountered: connecting to a Wi-Fi access point with a game console can be a royal pain in the behind. (I hope that last sentence didn’t trigger any filtering software.) So Wi-Fi Gamer simplifies the whole process, putting an end to entering WEPs and WPAs on your system once and for all.

There’s a button on top of the Gamer. Push that then head to your system of choice and select AOSS—for AirStation OneTouch Secure System—in the setup menu. Your system will connect to the Internet, no fuss, no muss. The Gamer remembers all your security settings and the like, so you don’t have to repeatedly enter them every time you wanna play online. (Buffalo worked with both Nintendo and Sony in Japan to get the Wii, DS, PS3 and PSP to work seamlessly, by default, with the Gamer.)

The Buffalo Wi-Fi Gamer can be thought of as a dedicated Wi-Fi network for your video game systems: you don’t have to connect directly to your Wi-Fi network, but rather the Gamer’s in-between one. 1UP points out that parents could use this to their advantage: if you want to limit your kids’ online gaming time, just shut off the Gamer. The parent can still surf the Internet using the Wi-Fi connection proper, but Junior is locked out.

Buffalo’s shooting for a $50 price tag for its release. Hey, Josh liked it when he saw it demoed. If it’s good enough to impress him (he’s cynical like nobody’s business), odds are us normal folk will like it, too.