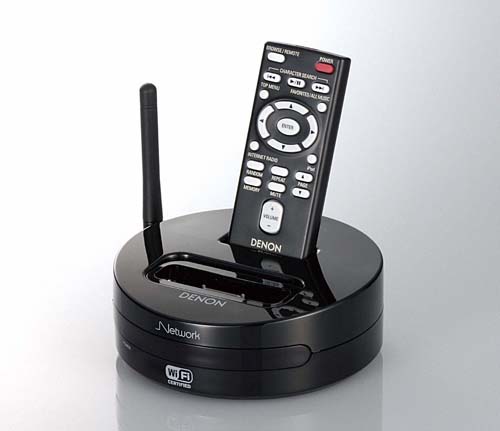 Amid a slew of new releases yesterday at the Hyatt in Jersey City, Denon introduced a WiFi iPod dock, the ASD-3W. It looks like a hockey puck with a dock and an antenna, but it’s much more: It actually lets you network most AV components like receivers, TVs, and some speakers, whether they’re from Denon or not. It lets you stream music, photos, and that precious but beleaguered Internet radio to those components from anywhere on your network — your PC, NAS, or an iPod that’s sitting in the dock on top.

Best of all, it gives you a TV-screen interface and remote to work with, so you can see what’s going where, and you get metadata and album art on songs that are playing off your iPod. Not bad for $229.99 (available in September), though if you don’t need the WiFi, you can pick up the non-wireless ASD-3N for $179.99 (available in August). Both models have Ethernet ports, RCA outputs, and S-Video outputs on the back.