Interactive TV has been around for a while in various forms ranging from the SMS voting driving American Idol, to the Finnish choose-you-own-adventure drama Accidental Lovers. Interactive TV’s paradigm argues for pushing PC functionality on the TV instead of TV functionality on your PC. Mark Cuban has opined at length on the shift.

A lifetime ago, in the mid 90’s, the first generation of interactive television focused on using a peripheral device to enhance your TV stream. Web TV, one of the first examples, wanted to splice together the internet with your TV through a set top box. After acquisition, it later became MSN TV.

The next crop of interactive TV offerings is aiming to add the same interactivity, but without requiring consumers to invest in another piece of hardware. ICTV is adding interactive functionality by using the cable box or DVR box you already own. Compared to other attempts, ICTV uses a dumb device strategy. Your cable box just needs to send keystrokes to their servers through your cable operator. The keystrokes tell ICTV how to render the Mpeg 2 stream going to your TV. It will look like a TV stream, but act like an interactive application, similar to the DVD menus people are familiar with. More on the tech here.

For instance, you can use your controller to browse through archived TV content on branded channels, set up personalized video feeds, and get web like interactivity. You’ll get this web-like functionality because ICTV is using web standards to do it, enabling publishers to even splice content from their website into the feed. This openness is supposed to make it more flexible than the closed system on demand programs use to deliver a level of interactivity. Networks will be able to have greater control over advertisements and easily create deeper content. However, it requires buy-in from the very networks developing these offerings.

ICTV is currently deployed in a series of international tests. They have 900,000 subscribers online through PCCW, Hong Kong’s television provider. They are also testing with 100,000 Grande Communications subscribers in Texas.

Interactive television was an easier sell in the days before broadband hit its stride, but may still have a roll in closing the gap between the internet and the TV. Recent studies have shown the two platforms aren’t antagonistic. Neilsen found that while 63% of broadband internet users watched broadband video online, it actually had a positive effect on TV viewership. IPTV may be growing up on PCs and the XBox, but TVs aren’t going away any time soon. 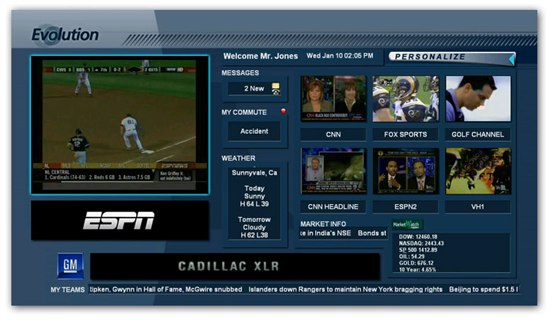