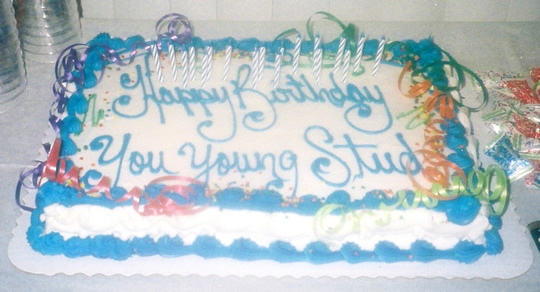 Happy birthday to you, you escaped from a zoo, you look like a monkey, and you smell like one too — HAPPY BIRTHDAY, BLOGGING!

Although difficult to pinpoint the exact moment in time that blogging’s Big Bang occured, it is widely believed to have happened about ten years ago with Jorn Barger‘s Robot Wisdom website. I’m not exactly sure how the Wall Street Journal figures that a site born on December 17, 1997 has been around for ten years as of July of 2007 but, hey, it’s a very large news organization and you should trust everything you read no matter where it comes from, right?

Actually, I should point out that WSJ says that providing a specific date is too difficult and that we should recognize the year 1997 as when blogging began. So there you have it.

Regardless of the exact date, take a moment to think back to what you were doing in the latter half of 1997. I was a naive, impressionable nobody from the Midwest getting ready to ship off to the University of Puget Sound where I’d spend the first three months of school drinking Jack Daniel’s Sour Mash whiskey mixed with Cherry Kool-Aid.

Look at me now! I’m a jaded, stubborn nobody from the Midwest who’s ass-deep in the fast-paced world of blogging and drinks alcohol as it’s supposed to be mixed — often without Kool-Aid. My, how times have sort of changed.

The Wall Street Journal article features some of blogging’s big names weighing in on how blogging has affected their lives and its impact on society as a whole. How has blogging affected your life?