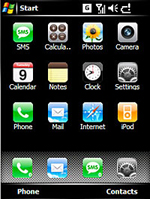 The iPhone has been out for a couple of weeks now, so apparently that’s been enough time for someone to look into how the new “revolutionary” handset is being used. Chicago-based usability consultancy User Centric, Inc. has announced that it has conducted a test with iPhone customers who purchased the mobile phone on the first day it was released. This study was conducted to identify overall ease-of-use factors and general usability issues among the very motivated early adopters, and see what their experiences were like during the first week of ownership.

“While multi-touch technology has been around for over a decade, the unique form factor of the iPhone is very compelling as it opens the door to a whole new set of user experiences. The first few days after launch spawned reviews of the iPhone, but we wanted to conduct the first independent and objective study with actual iPhone users to separate analyst opinion from the actual everyday user,” said Gavin Lew, Managing Director of User Centric.

The findings suggest that these early adopters were satisfied with the visual voicemail, interface for music playback, and for making and receiving calls. No surprise there. But the study also found that users were somewhat frustrated with text entry SMS, which is also no surprise since the lack of keyboard makes texting a bit of a pain. Likewise, users weren’t happy with the Google map feature or their Web browsing.

This is just the first of such studies that User Centric plans to conduct. What will be really interesting is see how the Mac-faithful adapt to the text messaging and Web browsing. We’ll be watching to see what User Centric reports.

iPhone Interface Put to the Test in User Research Study