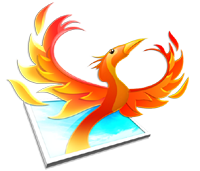 The guys behind Worth1000 and Plime have been tooling away at a new venture called Aviary (although it’s confusingly hosted at CreationOnTheFly.com). With Aviary, the New York based team is aiming at the rather ambitious goal of not only creating a marketplace for multimedia artwork, but a suite of robust collaborative online applications with which to create the works.

The obvious question is “why both tools and a marketplace?” As founder Avi Muchnick believes, both are needed for the other to be successful. They need a marketplace for creators to sell their works and encourage use of the tools. They need tools so they can confirm and maintain the copyright of the works created on the platform.

The lingering question is whether online tools will be of a high enough caliber to produce marketable content. So far, signs are pointing to yes.

When completed, Aviary will consist of 14 online tools of varying complexity: an image editor, color swatch generator, pattern generator, vector-based editor, 3D modeler, audio editor, music generator, video editor, desktop publishing tool, word processor, painting simulator, custom image product creator, photo analyzer, and file system to store it all on. Each of the applications is programmed in Flex, making them ready to meld with your desktop upon Adobe AIR’s public release. Adding an artsy twist, each tool will be named after a different bird.

All items created in these programs will be stored on their own file system called Rookry. From there, artists will be able to sell their creations on the open market. Even small pieces, such as patterns or sound effects will be marketable. If the works are made within Aviary, buyers will have the security of knowing they are buying an original work. If they incorporate outside content, they will be flagged as such. From within Aviary’s platform artists will also be able also create derivative works while maintaining attribution and royalty rights upon sale.

The team will be releasing the tools as they’re completed. They’re already showing some pretty serious results with their image editor (Phoenix), Vector Editor (Raven), and 3D editor (Hummingbird) outlined below: 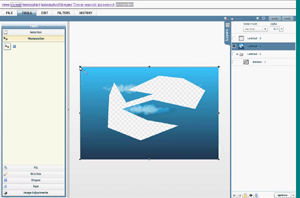 Phoenix is like Photoshop without trying to replace it. You get a lot of the familiar features such as brushes, patterns, stamps, smudging, shapes, blending options, and more.

The Aviary team decided on a core feature set by polling their band of PhotoShop fanatics using Worth1000 to find Photoshop’s most frequently used features. The editor can work on an image of max dimensions of 2880 by 2880 pixels.

The editor does support importing and exporting images of familiar formats, but any Aviary work that includes an imported image not created in the suite will be marked as such in the marketplace. This will help alert buyers to the possibility that the creator doesn’t have full copyright over the work. 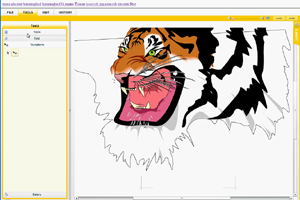 Raven is their vector based drawing program. It’s based on a lot of the design from Phoenix, but allows artists the flexibility of vector based drawing (e.g. easy scaling/rotation without losing quality). Raven will connect with Phoenix, allowing illustrations created in Raven to be rasterized and edited in Phoenix.

Click on the image to the right for a larger view. 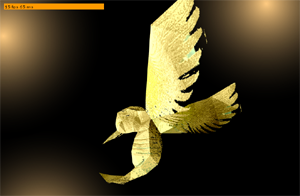 Hummingbird is their 3D editor designed completely in Flex. Right now they’ve just got a 3D model renderer along with some basic editing tools (element selection/deletion), but are working on a more robust UI for creating new models from scratch.

The hummingbird on the right was rendered with the engine in real time with a metallic gold skin.

Click on the image for a real time demo of the 3D rendering engine.