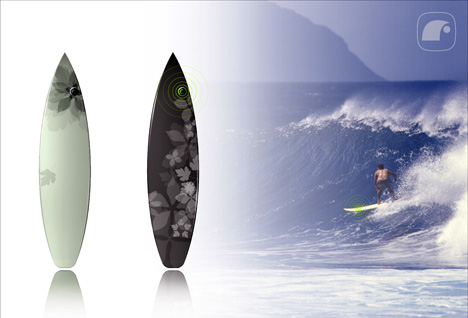 Surfers are a strange bunch and don’t take to gadgets very well. I feel awkward when testing out cameras that strap to my wrist and MP3 players that just get in the way. So the concept of this surfboard makes me apprehensive if I were looking at it from a shaper’s perspective. The radio and GPS units are going to have some girth and that does not bode well for shapers because of the weight ratio which throws everything off balance.

There’s no chance that the nose of a shortboard will house the radio and GPS as it’s the thinnest part of the board. I can see it working on a longboard or an epoxy board, but not a PU shortboard. I typically wouldn’t need a radio to communicate with others in the water because we all hover around the same take-off spot. If we get separated then I can see why it would come in handy. It’s the inexperienced surfers (if they can call themselves that) that get swept out to sea because they’re not in shape and just don’t know what they’re doing to begin with, so the radio and GPS would definitely come in handy. Eddie Aikau sure could have used GPS. And at least it’s better than IBM’s surfboard.