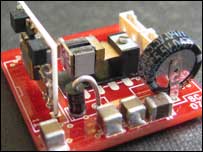 Across the pond at the University of Southampton, a teeny-tiny generator powered by ambient vibrations could be the next big thing for pacemaker-packing patients. The less-than-one-cubic-centimeter device is said to be 10 times more efficient than current devices and eliminates the need to change out the batteries, something that’s long-been a tricky task. In a pacemaker, the device would draw power from the vibrations created by the beating of the human heart. Unreal.

By removing excess wires and batteries, these devices are now able to be placed in previously hard-to-reach places and can be fitted with larger sensors. Beyond the benefits to the pacemaker crowd, these devices could also be used to monitor structural conditions in roads and bridges.

Although in its current state this generator is only able to produce mere microwatts of electricity, one would think that eventually this technology could be used to power all sorts of low-energy devices like the keyfob that you use to unlock your car or maybe even your TV’s remote control.