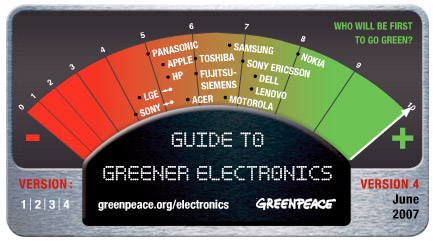 The tree-huggers at Greenpeace published their list of best and worst companies for the environment (specifically as it releates to harmful chemicals) last week and Nokia came out on top. Citing its policy of “eliminating the worst chemicals from many products,” Greenpeace gave the Finland-based cellphone an eight out of 10. Greenpeace rated Sony the worst, claiming that it has double standards when it comes to Individual Producer Responsibility. It seems Sony is for it in Europe while against here in the U.S.

Media-darling Apple is ranked 10th out of 14 with a rating of 5.3, taking a hit because it has no “green” product on the market. For shame, Apple. For shame.

How the companies line up [Greenpeace]