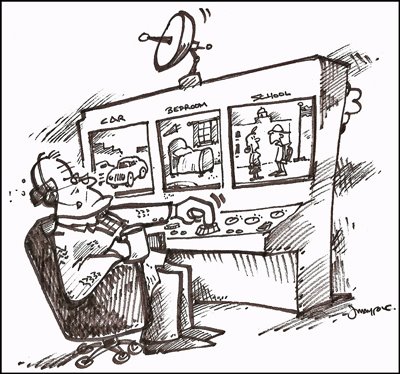 You may already be familiar with Nielsen, the company that tracks and monitors TV viewing habits. Only they don’t want to be known for just that anymore. No, they want a piece of that sweet, up and coming cellphone business. So it purchased a company—Telephia—in order to track and monitor cellphone use. With Telephia’s technology now its own, Nielsen will be able to tally all the minutes you’ve used, all the Web pages you viewed, music you’ve listened to, et cetera. All this so Nielsen can turn around and say to advertisers,”Golly gee, it seems kids like visiting… Well, wouldn’t you like to know? We’ll tell you, but it’ll cost you…”

That presumes, of course, that people, in large enough numbers, do anything other than use their cellphones to make calls and take dumb, blurry pictures. Seeing as though I have no interest in paying anything for HOT RINGTONEZ, well, there’s not much to track I guess.